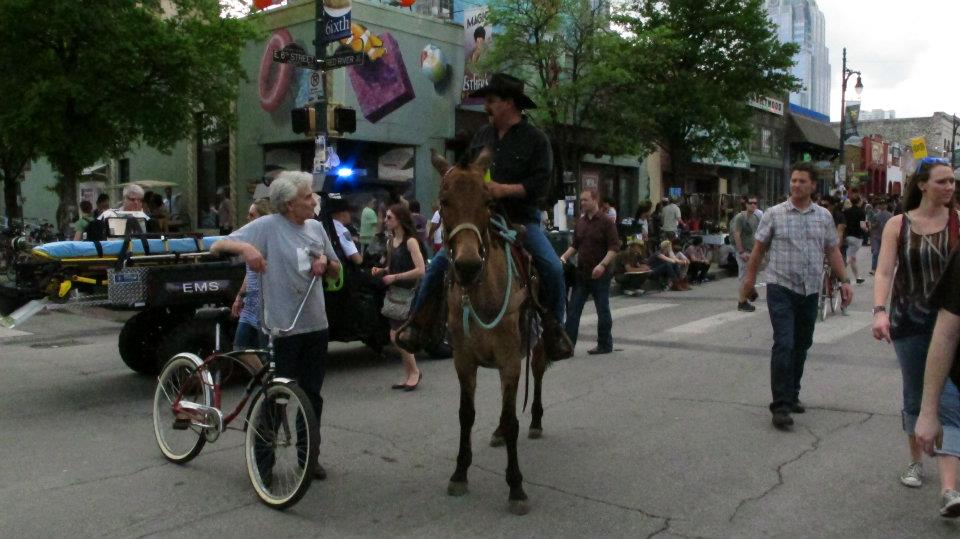 It’s been a long time since we last went to SXSW, three years ago we ventured across the water to enjoy the mythical festival known as SXSW, we even started a blog so we could tell you about all the exciting bands we were going to see! So it seems fitting, three years later, to use this very same blog to tell you about some of the most exciting bands playing this year’s festival.

We’re starting this list with one of the most exciting bands making music in the UK right now. Fielding a sound that is somewhere directly in the cracks between riotous new wave and 90s inspired club music. SWEAT played one of their first shows right here at the Lexington for White Heat and have gone from strength to strength in the intervening couple of years, releasing an EP and string of singles winning acclaim from the music and mainstream press. The sound is off kilter pop infused with 90s beats, stabbing guitars, sexy basslines and one of the most unique front men of recent times. The whole thing comes together in an orgy of onstage energy for the live show.

Marie Davidson has been at the centre of Montreal’s experimental electronic scene for the past five years as a member of Essaie Pas and DKMD. But it’s her own compositions that have caught my attention in the past 12 months, creating dancefloor oriented post punk punctuated by hypnotic motorik rhythms and all engulfing basslines. It’s industrial in it’s ability to make a room give itself over, elevating her to the focal point of a room moving separately to the same end.

Marie’s latest solo album, “Adieux Au Dancefloor” came out on Cititrax (the division of Minimal Wave records which focuses on new contemporary music). in October 2016 and received critical acclaims from Pitchfork, The Quietus, Resident Advisor and many more.

The thing I love about SXSW is discovering something you’ve never heard before but ticks every box that defines what you want your favourite music to sound like. Usually, you’ll walk into a venue and it will be right there in front of you, hitting you in the face like a bag of bricks (looking at you Protomartyr). On this occasion I wasn’t even going through the SXSW band list in any type of order when I heard Sneaks, it just happened, it found me. Minimal, twangy post punk from DC, scarcely more than bass, drums and that classic NY art-punk female vocal. It’s now everything, ever to me.

Thee MVPs seem to have become something of a fixture at SXSW in recent years, arriving like clockwork at the start of the week before embarking on an endurance mission to play as many shows as humanly possible before disappearing in a blitz towards California. The Londoners have been playing their relentless brand of amphetamine drenched garage rock in every dingy basement in every dingy street along with the occasional legendary warehouse party for the past few years and it’s not an exaggeration to say that they’re an integral part of London’s music landscape. At SXSW there is an even more determined anarchy, like everything depends on that one show at that exact moment in time, before becoming engulfed in their own whirlwind energy and disappearing to play a few blocks down the road.

Brutalist punks IDLES know the best way to scare a Tory is to read and get rich, a visceral war cry of the trampled and forgotten in our increasingly one party state. Will the Americans truly understand this sort of cathartic post punk? Perhaps in Trump’s America this sort of message, a more direct anger at an inherently failed and loaded system, is relevant now more than ever.

In the UK Shame require little introduction following a nationwide tour with country punk-ins The Fat White Family and a shit load of hype courtesy of the UK music press. It’s got the agitation of punk, post punk if only for the sloppy rumbling basslines reminiscent of early Fall, riddled with baggy indie confidence before lurching nochalontly into spoken word, all to a backdrop of angular guitars slowed down and morphed to the left by a stroke. Genre bending at it’s least gratifying because they’re obviously just doing whatever the fuck they want with little to no regard for convention.

Dream Wife are a band we’ve been lucky enough to have play at the Lexington since their earliest shows and most recently they came back to headline. They make infectious guitar pop that owes its edge to that incredible history of Riot Grrl as much as 90s angular indie. Sublime, female empowered, cut throat and one of our favourite bands of the last couple of years.

With only one song in the wilderness that is 2017, Lo Moon strike through the meaningless world of ambient/cinematic indie with a taught bit of genre bending dream pop that is as immersive as it is intense and as atmospheric as it is anthemic. They’re coming over the the UK after SXSW to play their first UK shows, including Hoxton Bar and Kitchen and a headline show at the Sebright Arms.

Given that my entire existence at SXSW is sustained by pizza and tequila sunrises there was no way I wasn’t going to listen to a band called PIZZA TIME. And you know what, despite describing their sound as “Gangsta” I ploughed on undeterred and was rewarded with some jangly indie, garage, dream pop weirdness that’s sung in Spanish. And it’s great. My research tells me that the band started life as a zine that was never fully realised but morphed into a band which has three releases on the increasingly legendary Burger Records under their belts. That’s the short version but the long version actually makes for pretty interesting reading.

Show Me The Body

Show Me The Body are perhaps the most legendary band on this list, a group of New Yorkers famed for their invasive live shows that see people leave their inhibitions and senses at the door. In 2015 they bought their Body War to Dalston’s Gillett Square, for NTS, bringing the place to a standstill in the middle of the day via the means of banjos and experimental hardcore. Leave with a black eye and wake up with a hangover, repeat.

Another band that seems to play SXSW every year, could there even be a SXSW without these Austin natives?

And if that wasn’t enough, here’s a bunch of other great bands playing this year’s festival which I’ll be adding to over the course of the week: