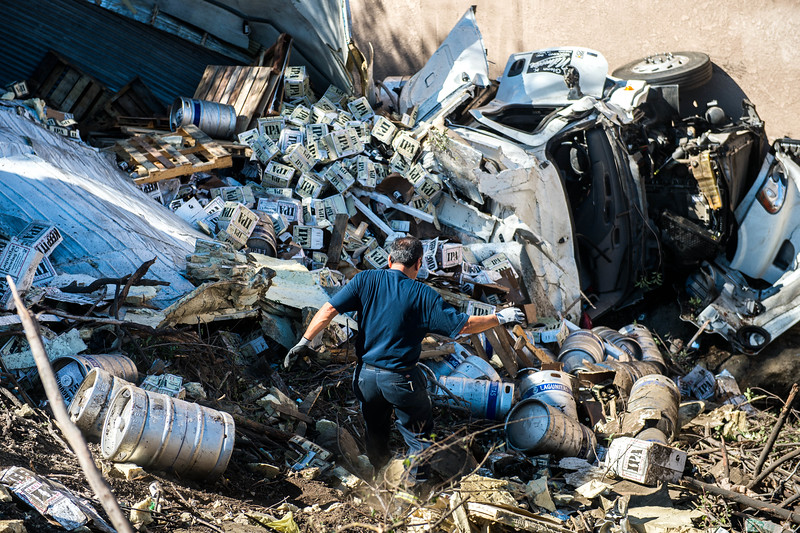 If you wandered into the Lexington last Tuesday you might have been greeted with a trashed bar, trashed faces and trashed people. The Lagunitas crew were in town and they were having a party.

I’d love to say it started off innocently enough but nothing ever starts off with innocence where the Lexington is concerned. We’re not stupid and no one thought this wasn’t going to be boozy but I don’t think any of us expected quite how rowdy things could have ended up. By 10pm people were getting carried out pretty much on rotation. Perhaps we should had had some mild concerns when the 12 barrels and 20 cases of beer arrived and the weakest offering, the staple Lagunita’s IPA, was 6.2% and the strongest a 10.4% coffee stout served in a 700ml bottle, you know the ones I’m talking about, it’s the same bottle that wine comes in and it’s about the same percentage.

It did genuinely start off innocently enough, everyone was milling around having a chat and drinking some beers. Nothing to see here, it is a pub after all. Then John Drain played and that got everyone going a bit, a few more drinks were drank, maybe a couple were spilled, then John Drain played again and then I guess somewhere around that time it went up a notch and people started saying things like, “give me the strongest thing you have.” And then people stopped finishing their drinks and started having a couple of sips, popping out for a fag and then ordering a brand new drink and then at what felt like midnight, but could have been much earlier, the Lex was drowning in a cocktail of aborted pints of Lagunitas, broken glass, a bit of coffee flavoured vomit, forgotten morals and wasted Californians.

It was, for what it’s worth, one of the best parties we’ve ever had in the Lexington and if you happened to be in that night we’re either very sorry or hope you had a great time too. Thankfully no one took any photos, but this sums it all up…