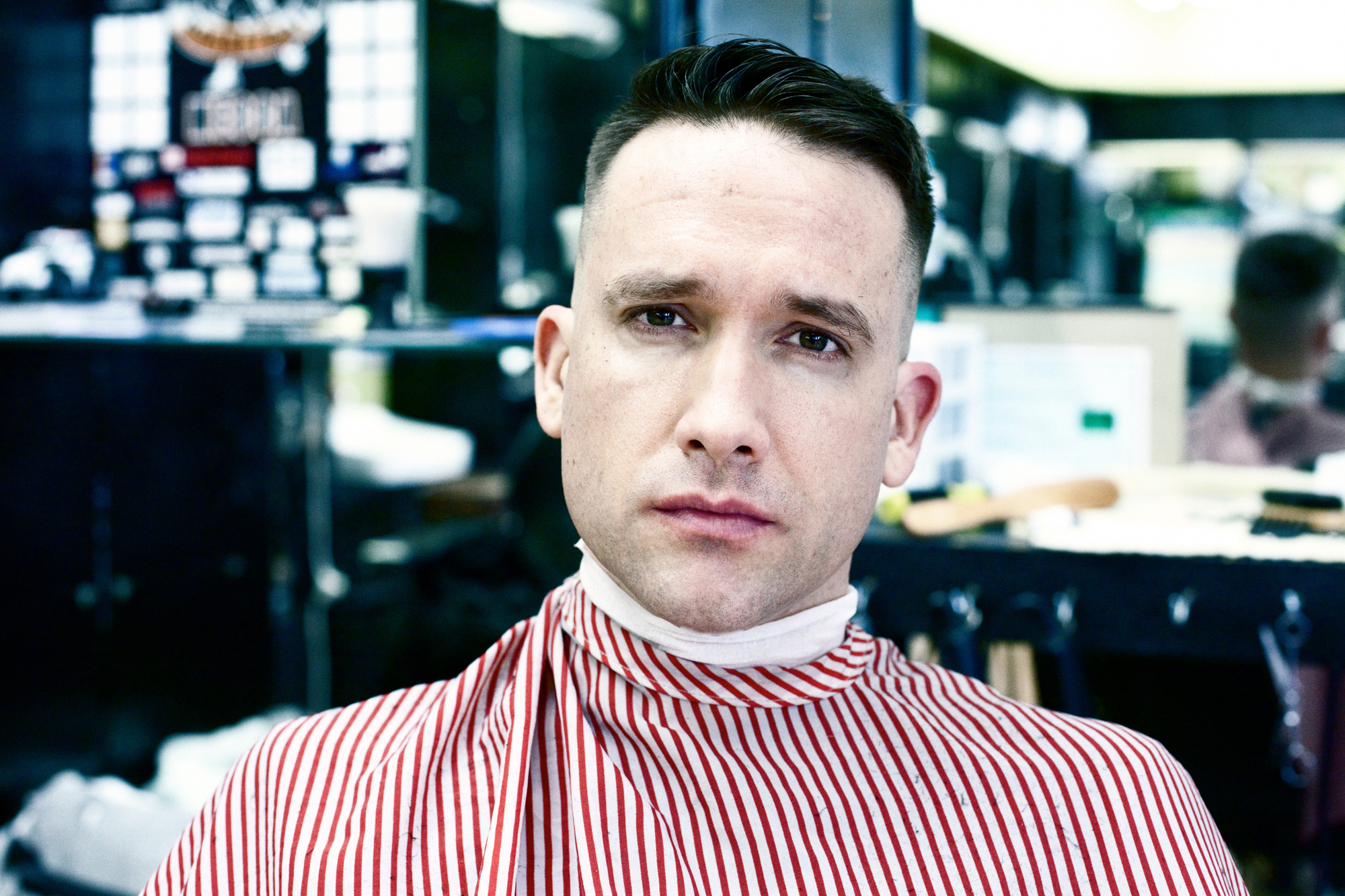 Don’t forget to show your advance at the bar to get 10% off our burger pop up GoneBurger, especially if you’re coming to our sold out shows with Saint Agnes, Guida or Mogli!

JAMIE STEWART has spent 2017 showing how skilled he is at multi-tasking, having toured the most recent Xiu Xiu album ‘Forever’, piled on the sonic pressure with Lawrence English as HEXA and having paid final homage to The Music Of Twin Peaks. 2018 sees that all change with Jamie committing to some rare solo performances. The format is simple: Jamie, electric guitar and voice, reducing the Xiu Xiu songs you know and love down to their most fragile husk state. As the principle songwriter, musician and vocalist behind avant-pop legends Xiu Xiu, Jamie Stewart is very much one of UTR’s favourite artists. Jamie draws heavily from wildly disparate sources – cacophonous noise, gamelan, folk and the lush hooks of 80s UK post-punk, to name a few – while his tortured lyrics and anguished delivery consistently deal with the morose, suspected and the taboo. Expect new material, unusual covers and favourite tracks from the Xiu Xiu back catalogue, making for a truly memorable experience.

Hailing from Saskatoon, three-time JUNO awarding winning artists THE SHEEPDOGS’ burst onto the international scene after beating out thousands of artists in 2011 to appear on the cover of Rolling Stone Magazine. Since then, The Sheepdogs have amassed six JUNO nominations, toured worldwide and earned Platinum certification for their 2010 LP Learn and Burn.

The Sheepdogs’ latest self-titled LP produced by Patrick Carney (The Black Keys) debuted at #1 on the Top 200 SoundScan Chart, garnering another GOLD record for the band.

“Our goal is two-fold,” Currie says. “We want to make killer albums that people really want to listen to, but we also want to have a really reputable live show. When we come through town we want to be the hottest ticket there. Those two elements are what make a truly great rock and roll band. Really, though, we just want to play to anyone who is willing to give us a shot and who wants to have a good time.”

‘A series of striking, stylized singles and a moody, gripping debut album (Songs From The Bar Room Floor) connected the dots between the Vox organ veneration of the ’60s and the modern noirs of Tindersticks and Nick Cave, creating a darkened stage for a flurry of soulful sounds that might be called garage if their creases weren’t so sharp.’

In the October of 2002, composer and guitarist Craig Fortnam found himself walking through the City of London with a sackful of tunes slung over his shoulder; tied to a stick (Dick Whittington style). Now, as all music comes from the air, the sack was all that stopped Craig’s tunes from escaping and following the Thames out to sea. Needing a substance with the weight of history behind it, Craig bent down and began to scoop up handfuls of London clay, folding and kneading it into the melodies and chords from his sack. As this was such hard work, he got his wife, Sharron, to help. As she folded and kneaded, she began to sing, so her beautiful voice found it’s way into the expanding mixture.

When the music was almost ready, Craig called together twenty musicians and singers from all over the Great Metropolis and they all ducked into St. Martin’s-within-Ludgate where the North Sea Radio Orchestra was born. As the clay music was still wet, and therefore somewhat fragile, NSRO only performed in the City of London for the first while. So, their growing audience had to travel to the strange and magical streets of old Londinium to hear the beautiful sounds.

Eventually NSRO ventured forth into the wider world where they have attracted many glowing reviews for their live and recorded performances.

They like to play in churches like St Olaves Hart St or St Giles in the Fields. They enjoy the resonant acoustics and the lack of amplification. Art galleries suit them fine too, like the Fishmarket in Northampton or Whitechapel Art Gallery in East London. They like to play at around five o’ clock at festivals like The Green Man, Frome Festival or the City of London Festival. They enjoy performing in rock venues and opera houses with amplification or classical stages like the Purcell Room. Likewise they are not adverse to performing live for BBC6 Music or Radio2. If you ask them they’ll probably play just for you.

Roxanne de Bastion sings deep and delicate songs that dance between left-of-the-middle pop and 60’s inspired rock. Her 2017 release ‘Heirlooms & Hearsay’ made the UK independent music scene take note: from BB6, to Clash, FATEA and R2 Magazine, the nation is falling in love with the London / Berlin artist, who delivers sharp social commentary with a pure and instantly recognisable voice. Over the past 18 months, de Bastion has opened for the Wainwright Sisters, Thea Gilmore & Lambchop, toured in the US and has graced Glastonbury’s Acoustic stage and Cambridge Folk Festival’s stage 2. The Lexington show will be a full band performance, featuring songs off her album as well as new material.

Club Kuru are a British five-piece alt-psych-band, fronted by Laurie Erskine and Laurence Hammerton. Following last year’s widely acclaimed EP and single releases, which saw them secure notable support from BBC 6Music and Radio 1 they are now readying the release of their debut LP; Giving In.

The band share eclectic inspiration from classic greats such as Shuggie Otis, Herbie Hancock and Quincy Jones. And you will often hear Steely Dan and The Beach Boys humming from within their studio walls. They use and have studied recording techniques from a bygone era, solely using analogue synthesisers and equipment. With musical roots firmly in the jazz and soul traditions they have built a richly textured, flowing, contemporary sound. Their music is characterised by its jerky grooves, mellow, silky vocals and harmonically complex song writing.

Themes of lost love and broken dreams sit gently against a soft, summer backdrop. Ultimately, the sound is unique – it is the product of the band’s bare hands, put together in the space they worked tirelessly to perfect.

Oh Pep! join us from Australia!

“Fast, boisterous and baroque, a statement of intent that highlights the groups ambition to be more than just a folk act” – The Village Voice

Michael Chapman, now in his 50th year of live activity, is a genuine folk music legend, recently described by The Guardian as ‘the man who connects Elton, Bowie, Sonic Youth and Nick Drake’.

It has been a whirlwind couple of years for London ​indie-pop quintet ​Night Flowers, ​since these close friends from North England collided with Boston, Massachusetts born vocalist Sophia Pettit ​and began forming their irresistible brand of heart stirring, romantic pop. Creating ​a joyous combination of intertwining female/male vocals backed by glistening guitars and dreamlike atmospherics that has seen them amass friends, fans and accolades across the world.

With several well loved singles, extensive UK and European dates and a Japanese tour under their belts, last summer found them touring the UK with The Pains of Being Pure At Heart​ and ​Japanese Breakfast​, ​as well as a main stage performances at ​End of The Road​ and​ Visions.

With a new album due in April (on ​Dirty Bingo Records)​, this looks set to be Night Flowers’ most exciting year yet, as they hit the road in full support.