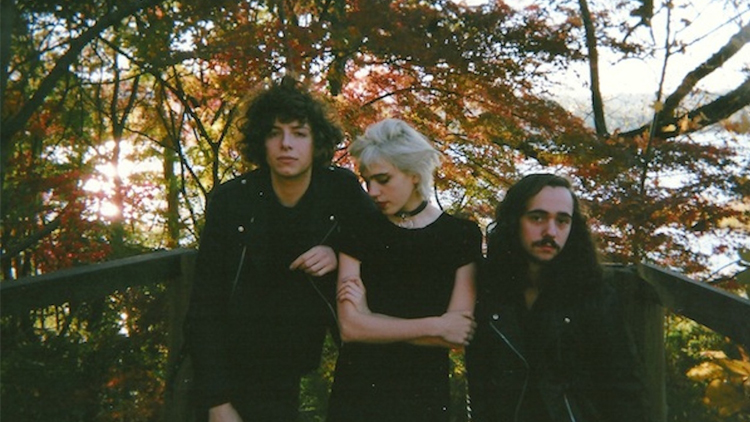 May 2015 at The Lexington, listen to our playlist and check out our selected listings below.

Don’t forget, you get 25% off your food bill if you show your gig ticket when ordering before 8pm!

Douglas Dare
+ Eera
Monday 4th May
Bird On The Wire
Douglas Dare is a London-based singer-songwriter, originally from the coastal town of Bridport, South West England.
The son of a piano teacher, Douglas began composing instrumental music from a young age but it was not until studying popular music at University in Liverpool in 2008 that he began songwriting. Douglas’ rich and haunting vocals are combined with lyrics crafted from his own poems and short prose, a writing style that gives his intimate songs wisdom far beyond his 23 years.

Tickets: http://www.birdonthewire.net/events/douglasd-lexington
Rozi Plain
+ Babe
Tuesday 5th May
Parallel Lines
The unassuming charm of Rozi’s live show has led to tours across Europe, the UK & USA. Along the way she has traversed countries and continents together with such like-minded luminaries as Devendra Banhart, KT Tunstall, James Yorkston and Viking Moses, as well as many appearances at festivals such as Green Man and End of the Road and opening the Park Stage at Glastonbury 2013. A BBC6 favourite Rozi has perfomred numerous live sessions for Marc Riley and Lauren Laverne. Whether performing alone or with an assembly of her regular musical allies (including François & the Atlas Mountains, This Is The Kit, Rachael Dadd and Being There) her uncluttered songs and effortless hooks create a blissful, singular voice. 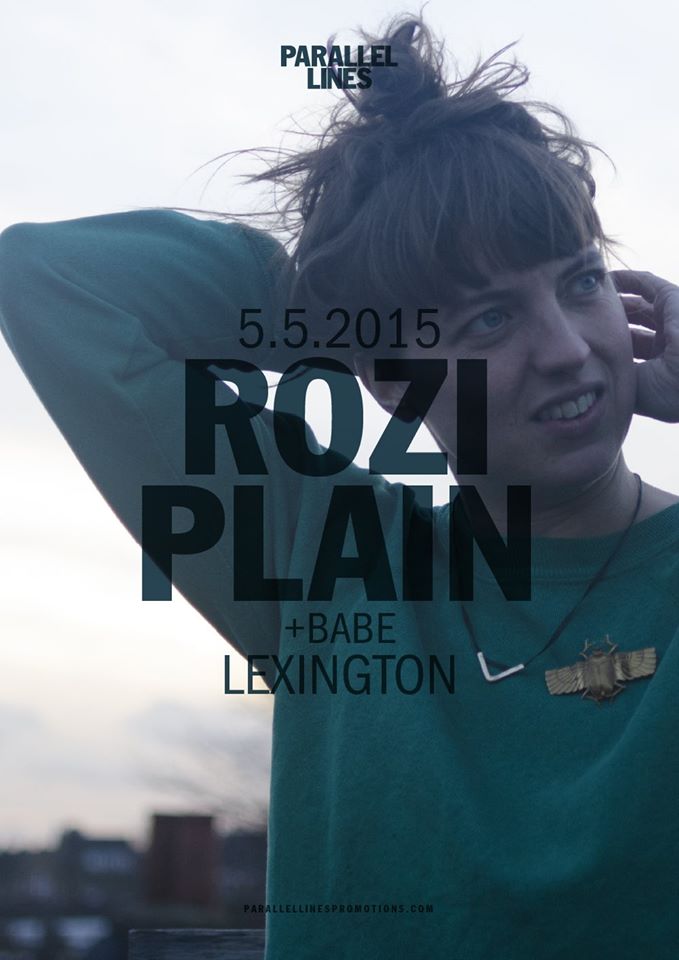 Tickets: https://parallellines.ticketabc.com/events/rozi-plain-2/
A Grave With No Name
+ Paper Dollhouse + Dee Sada
Wednesday 6th May
A Grave With No Name, is the recording project of Alexander Shields. His fourth LP Feathers Wet, Under The Moon, is due out via Lefse on May 4th.
The follow up to 2013’s ‘Whirlpool’, ‘Feathers Wet, Under The Moon’ was recorded in Nashville by Mark Nevers (Bonnie “Prince” Billy, The Silver Jews), and features members of Lambchop, guitarist William Tyler,and Daniel Blumberg of Hebronix. 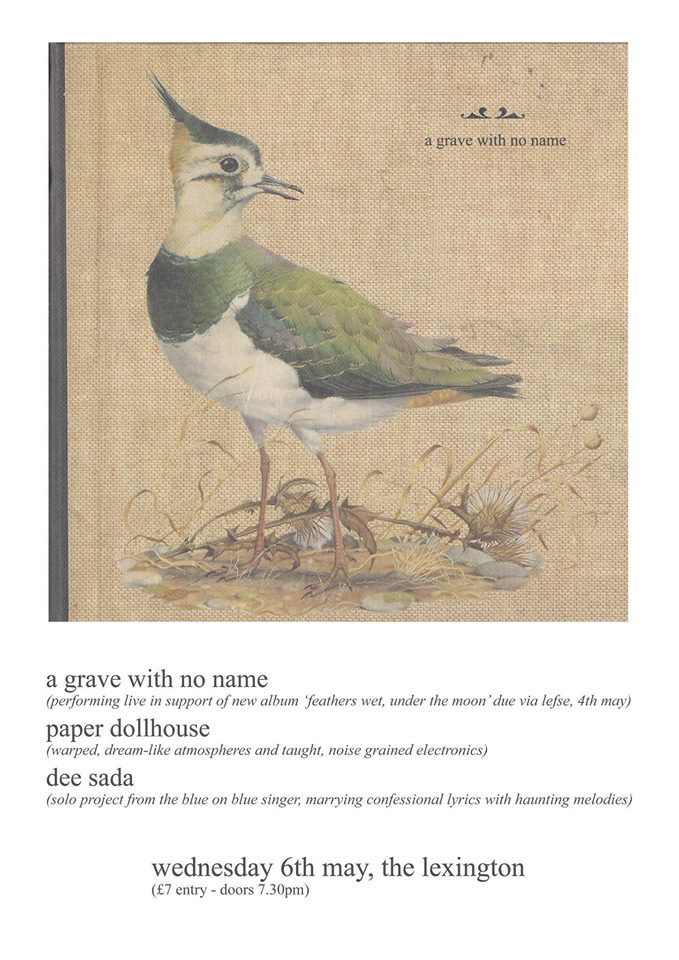 Tickets: http://www.wegottickets.com/event/310941
Bully
+ Kid Wave + Fraser A. Gorman
Thursday 7th May
Metropolis
Nashville band Bully take the glistening grooves of early new wave and late 70’s pop/rock and grimes them up with the distortion of an indie-punk aesthetic, pretty melodies hazily howled through vocalist�Alicia Bognanno’s higher register, weaving their way like a sun-stung fiberglass surfboard over the vigorous rhythms and cresting guitars. 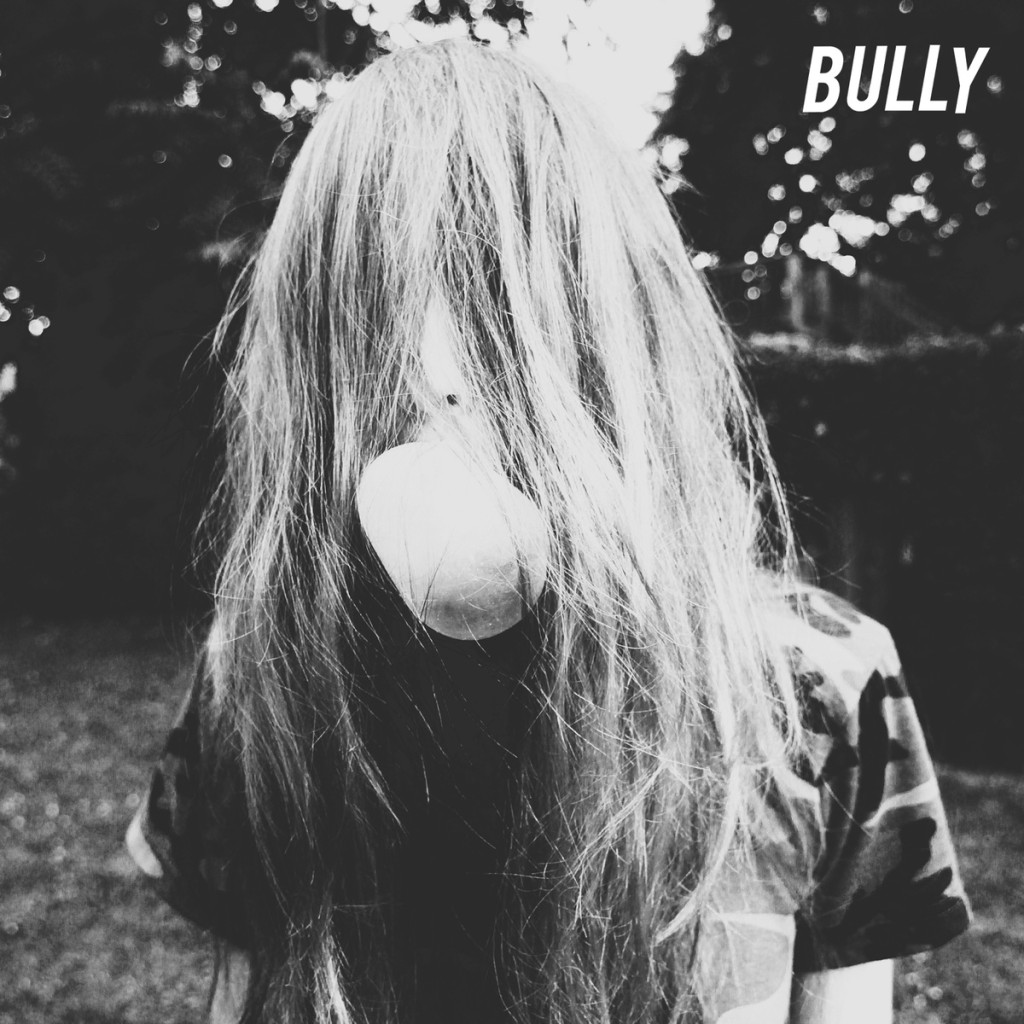 Tickets: http://www.gigsandtours.com/event/bully/the-lexington/859131/
Lusts
+ Kate Miller + Suns
Friday 8th May
White Heat
“The brothers aren’t afraid to waggle their overt ’80s influences under our noses. New Order, Joy Division and even Spandau Ballet are nodded to, but while Lusts sound like a band steeped in the zeitgeist of 30 years yonder, they don’t sound like they’re doppelgängering any particular act. They’re like hidden gems, a newfound relic of a generation lost. ” The Line Of Best Fit 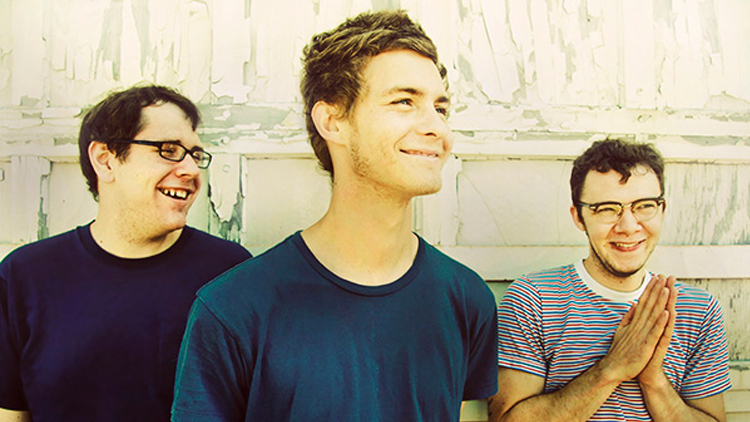 Tickets: https://www.facebook.com/events/939654569400162
Outfit
+
Wednesday 13th may
Eat Your Own Ears
At the beginning of 2014, Outfit found themselves scattered across two countries and three cities, separated by life and love from each other and from those closest to them. ‘Slowness’, the band’s second full length LP on new label home Memphis Industries, is the sound of its five members snatching intensive weeks to plant themselves in one place, with the tensions of touring, moving, and transatlantic relationships still weighing heavy in mind, to create an album with bold presence. 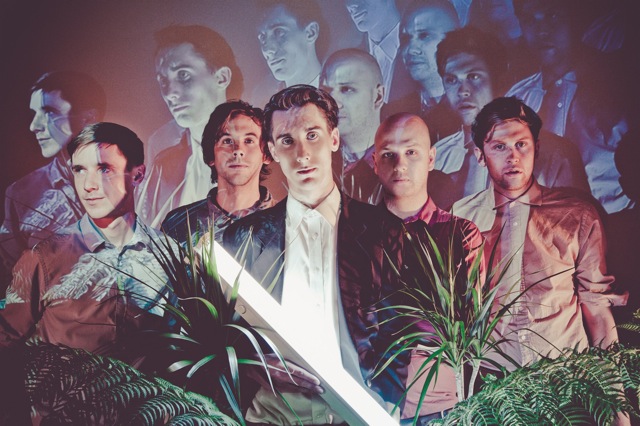 Kens Krautrock Karaoke is back with a very special volume, this time it includes readings from the Quietus editor John Dorans recently launched book – ‘ A Jolly Lad ‘..the live readings will be accompanied by music from Arabrot.

We are offing 2 different tickets to this event. First is a general admission to the night for just £7 or you can buy the ticket and book ( RRP £15 ) for just £19

John Doran, a Lancashire born writer and editor of the Quietus website, explains why he has put the event together.

Since he figured it was high time he was having a mid-life crisis; the author and journalist has decided he might as well do the fucking thing in style. Doran, the editor of the Quietus website, writer for VICE and the Guardian as well as occasional broadcaster for the BBC and Noisey has a book called Jolly Lad coming out this May on Strange Attractor press concerning his recovery from alcoholism, the joy of fatherhood, repairing the damage done by decades of habitual drug use, coping with mental illness and obsessive behaviour – especially regarding music and art. And this is being released with a spoken word album featuring musicians from Manic Street Preachers, British Sea Power, Factory Floor, Grumbling Fur, Eccentronic Research Council, Teeth Of The Sea, Perc and more.

And not only that but for the whole of May he is undertaking a 31 date reading tour of England playing to captive audiences along the way. Literally captive, in the case of the three high security prisons he’s doing shows in. Other venues include churches, WW2 bunkers, record stores, bookshops, warehouses, libraries, theatres and cinemas. 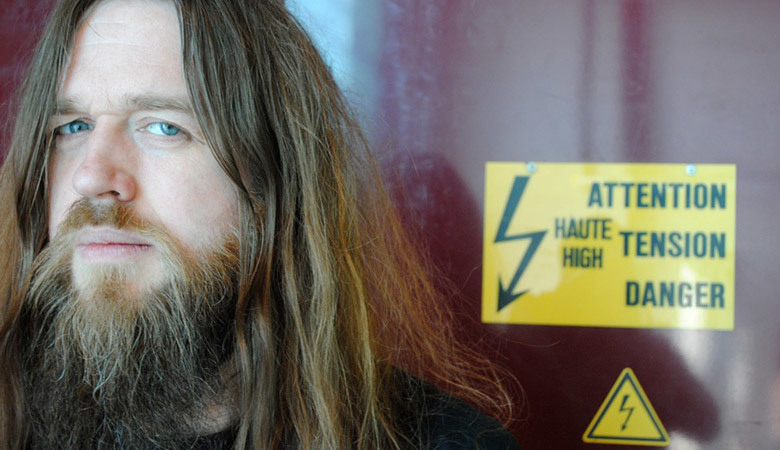 Verite
+Sweat
Friday 15th May
White Heat
Her lead single “Strange Enough” ignited the internet immediately with its melancholia-meets-electro-pop sound. And not only did it qualify for summer anthem status, it also won her comparisons to everyone from Lana Del Rey to Banks to Ellie Goulding and paved the way for her forthcoming EP. 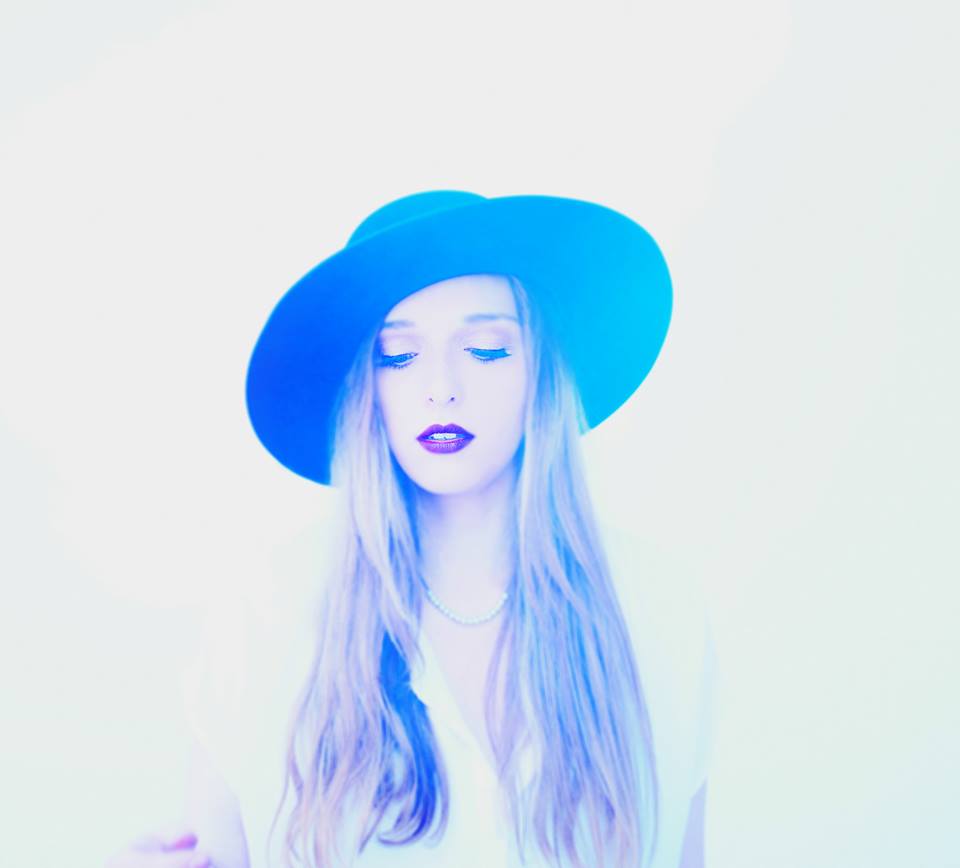 With life defining lyrics that draw empathy from the depth of your gut and unapologetically pop-punk choruses, Great Cynics are a band you can give your heart to.
Back from Australia following a tour supporting Smith Street Band right after last year’s European dates with Joyce Manor their live show is not just perfected, it’s so good you’ll want to get in the van with them after the gig and drive to the next one.
Announcing their third album, Great Cynics play this release show at London’s Lexington with support from Woahnows and more to be announced. 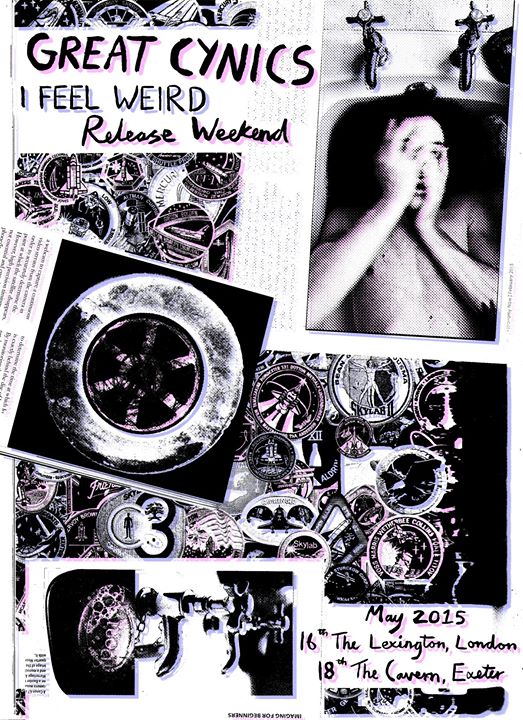 Steve Gunn is a New York-based guitarist and songwriter. With a career spanning nearly fifteen years, Steve has produced volumes of critically acclaimed solo, duo, and ensemble recordings. His newest record for Paradise of Bachelors is called “Time Off.” 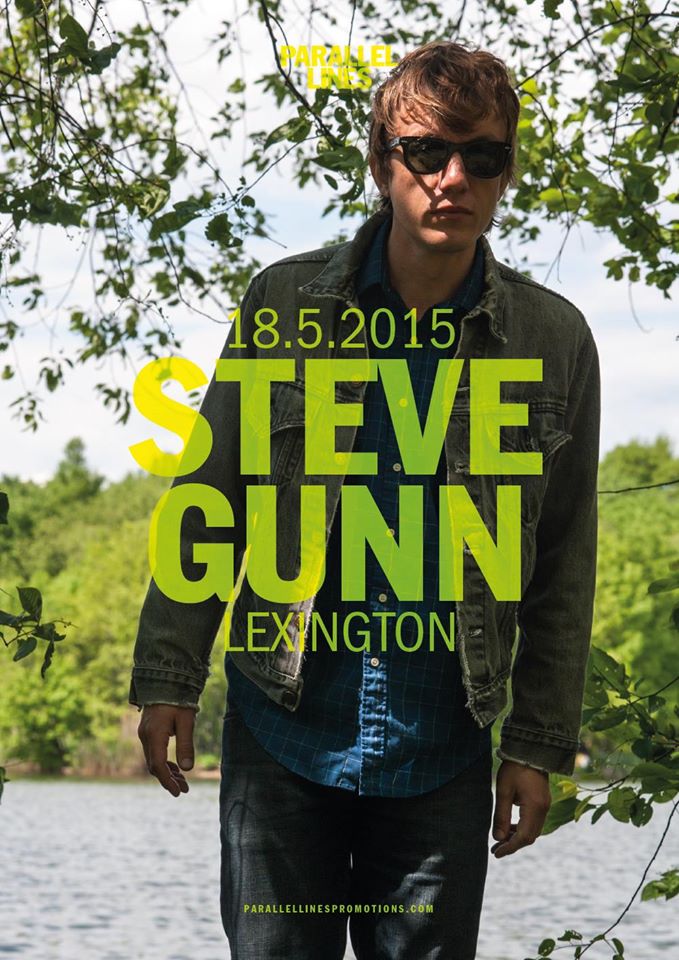 Swedish electronica group Agent Side Grinder are rooted in post-punk, industrial and dark electro sounds.
First on are special guests Minny Pops – The Dutch electro pioneers formed in 1978, were produced by Martin Hannett, toured with Joy Division and were the first Dutch group to record a Peel Session. 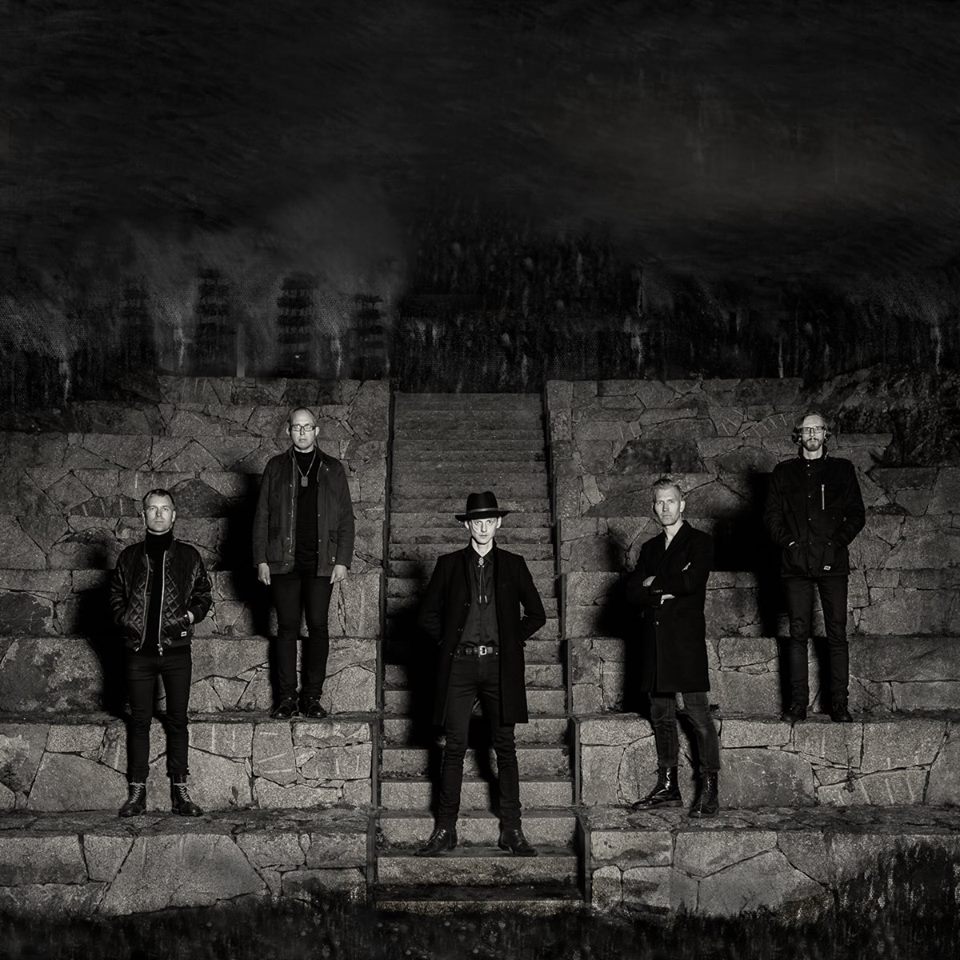 Rangleklods pushes the boundaries of genre and production methods and create intelligent club music which generates movement ��” both physically and mentally. Rangleklods is about finding the balance between simplicity and complexity and following an idea wherever it is heading..

Rangleklods expands the physical and artistic framework of the electronic live-concert by implementing live vocals, instruments and an impressive amount of controllers through which the computer is materialized as an instrument of unreachable limits rather than just a handy tape recorder. 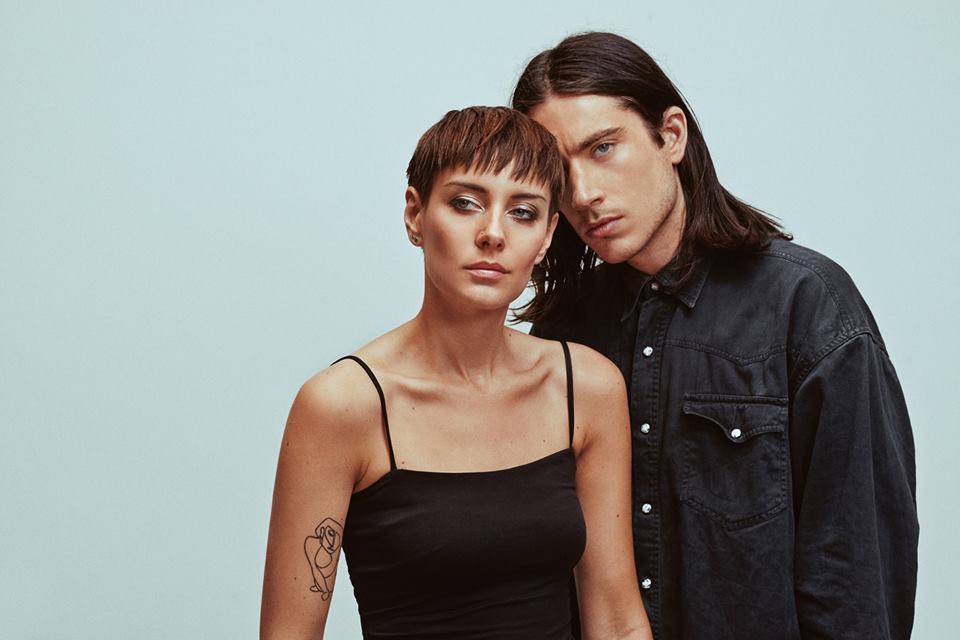 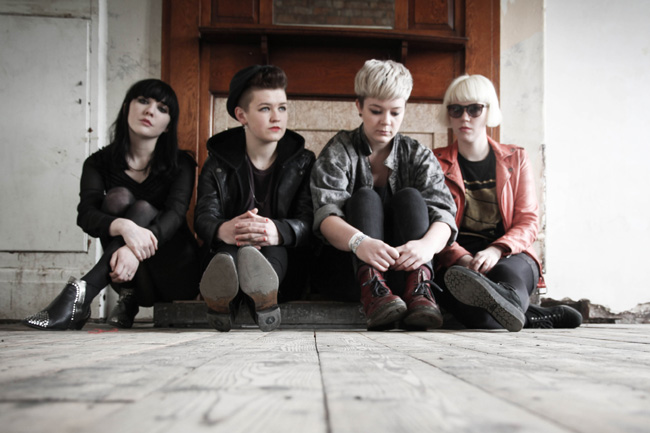