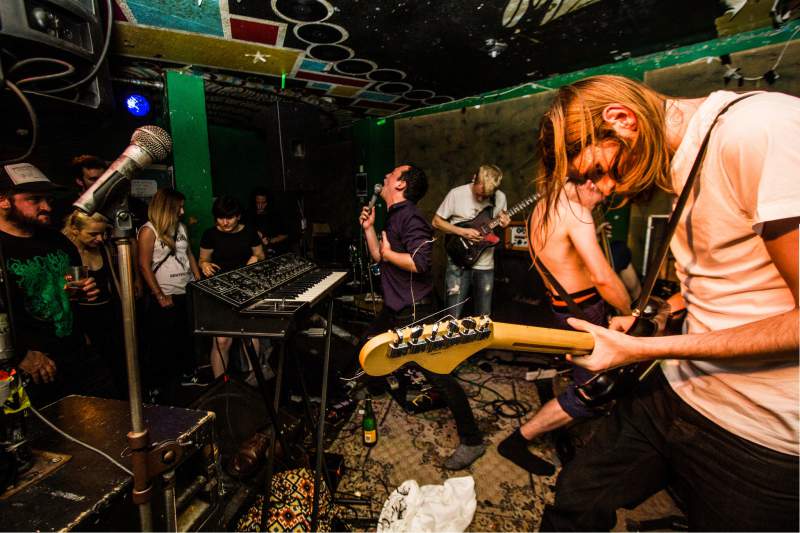 New year, new you? Well the new year is certainly rammed full of new ideas at the Lexington including an extensive new vegan menu from GoneBurger. Read on for all the great shows we have filling the month and grab an advance ticket to enjoy 10% off your food order!

Thanks to Track & Field and Fortuna POP; without their previous stewardships of the Winter Sprinter, we’d all be sat at home feeling glum the first week of January.

The Line of Best Fit returns with the fourth edition of its annual festival showcasing the very best in new music.

Curated by the biggest independent music website in the UK, the events have consistently sold out for three consecutive years – previously featuring the likes of IDER, Dagny, Pumarosa and Nilüfer Yanya, Five Day Forecast 2018 includes some of the most innovative and exciting talents around, including vibrant Manchester troupe Pale Waves, the debut UK performance from recent Matador signing Snail Mail, the Nashville based Soccer Mommy, much-hyped South London teenager Joy Crookes and future star in the making Liv Dawson.

As part of tQ’s 10th birthday celebrations, and to help raise some much-needed funds for the site, we’re teaming up with one of London’s finest small venues The Lexington for a special run of exclusive live performances.

On Saturday January 13, we’ll be hosting the blitzkrieg of inertia-inducing electronic dissonance and twitchy, narcotic-withdrawal percussion that is Gum Takes Tooth, one of the greatest live bands around.

Joining them will be the quite preposterously loud Brighton outfit Lower Slaughter, whose debut album was described by tQ as “full of pomp, spit and bile careening about with uptempo stomping and heavy sludge”. Finishing the bill will be Mighty Lord Deathman, who offers twisting, thumping, evil electronic spikes.

An Evening with Wrangler

As part of tQ’s 10th birthday celebrations, and to help raise some much-needed funds for the site, we’re teaming up with one of London’s finest small venues The Lexington for a special run of exclusive live performances.

Wrangler, the project of Cabaret Voltaire’s Stephen Mallinder plus electronic outliers Benge and Phil Winter. They’ll be joined by guests Lonelady and Serafina Steer, with support from the magnificent Lone Taxidermist.

The feral, ferocious Pigs Pigs Pigs Pigs Pigs Pigs Pigs will be playing on Friday January 19, and will be bringing an extremely special guest along with them in the form of Richard Dawson. The titans of crushing, doom-ridden psychedelic rock last played The Lexington early this year, and their return is to be equally unmissable.

Hypnotic Kingdom is the new project from Nathan Hewitt, founding member of Cheatahs. He began writing and recording at home in 2016, after deciding to take a break from the music industry, when relentless touring finally took its toll.

In an attempt at a rediscovery of sound and self, “Would You Be There For Me?” is a 9 song album, which aims to reaffirm the therapeutic and restorative power that creating music can bring.

The album was mixed by Dean Reid in Los Angeles and the drums were played and recorded by Marc Raue in London, both former Cheatahs members. Everything else was recorded by Hewitt in London.

For the live show Nathan is joined by Marc Raue on drums and has recruited John Webb (Male Bonding) and Conan Roberts (Mazes) on guitar and bass.

“When I was first told about Duds, it came with the considered opinion that the guys were far from what you’d call ‘careerists’.
“They don’t take themselves too seriously” was another comment. I could have taken this as a warning that they weren’t in to for the right reasons – but that couldn’t be further from the truth. From my perspective Duds simply won’t bend over backwards to ‘get on’. They do what they do and you can take it or leave it. I took it – with both hands… with a vice-like grip. They have the invention and urgency of Edinburgh Legends The Fire Engine’s. The Post-Punk ethic. Short songs, short sets = short album.
They’re one of the most thrilling bands I’ve seen in years – and the fact that they’re releasing this brilliant piece of work on the Castleface label adds the last piece of a perfect ‘outsider’ jigsaw puzzle. Duds sitting alongside Oh Sees, Ty Segall, White Fence, Useless Eaters et al. THERE IS A GOD!”

‘You kind of know where you are (in a good way) with a band name like Duds, self-effacing in the the way only the British can be. Lacking even the qualification of the definite article! Musically they don’t disappoint either. Lead-off track ‘No Remark’ from their latest EP Wet Reduction has an element to it that doesn’t quite qualify as music (in all the right ways) a bit atonal, in some rhythm that’s not 4/4 but is somehow some kind of pop from another dimension.’

Trudy and the Romance

Somewhere among the daydreamers and heartbreakers, beauty queens and jock teens, Trudy and the Romance are looking to lure you into their suitably skewed, cinematic world. On new single ‘Is There A Place I Can Go’, the trio’s dubbed ‘Mutant 50s Pop’ takes a more contemplative turn. The single is part of their Junkyard Jazz EP, which will be released through B3SCI on November the 17th.