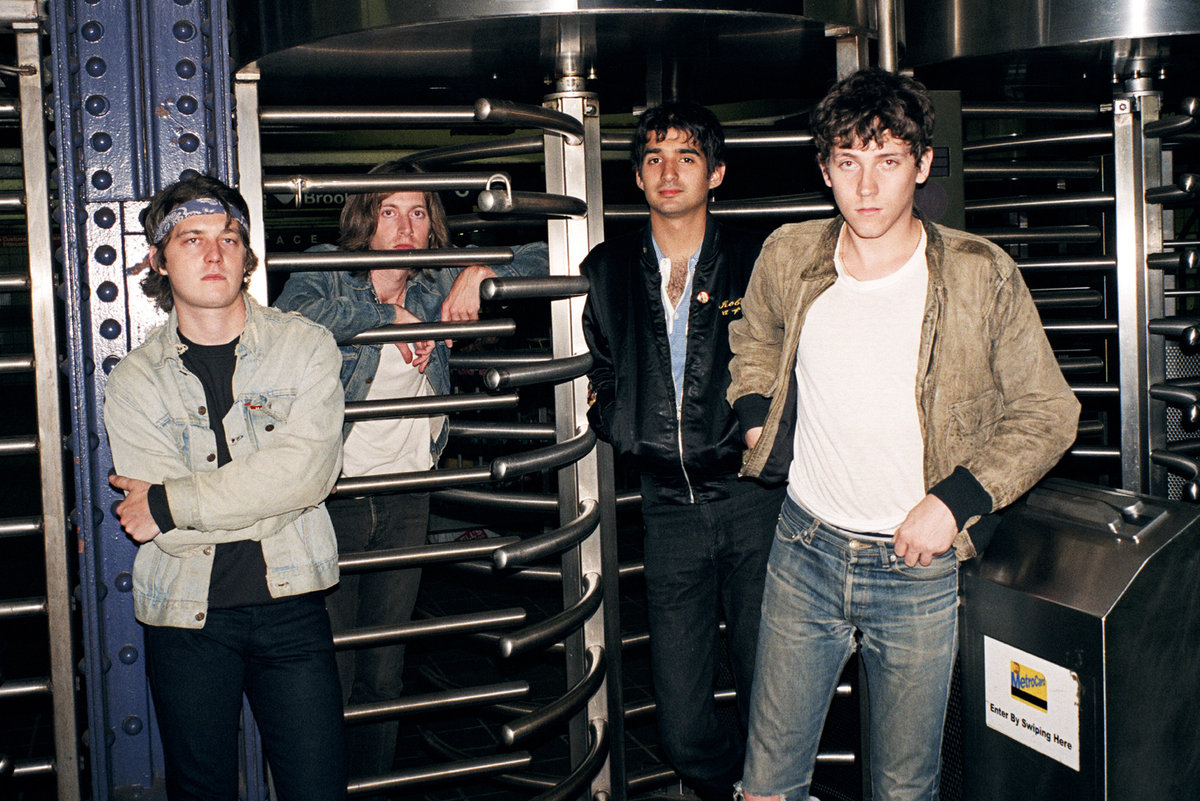 Cowbell join us for the release of their third album on Damaged Goods after signing in 2009. The duo play garage/soul/rock n roll and write songs that combine a lyrical charm and ease with a sound that’s full-bodied and powerful in spite of their stripped-down set-up. They take their influences from both sides of the Atlantic with a love for both the output of U.S labels such as Stax, Motown and Sun and for British sixties R and B bands such as The Small Faces, The Kinks and The Zombies.

The legend of Andalusia must now include GUADALUPE PLATA, three men who create a sound as timeless as flamenco and as potent as rock’n’roll, as haunted as the Mississippi blues, as alluring as forbidden sex, as dangerous as a knife fight. The strains of their guitars are dreamlike and electric, three men creating mojo and duende with primitive instruments, summoning the ancient spirits, and conjuring the mystical powers of the Saints.

Their new record GUADALUPE PLATA is a revelation, a testimony: GUADAPLUE PLATA is at once perfect for séances, exorcisms, and all night parties. This is the dangerous sound of seduction.

The decision to record near their homes in Andalusia, in a recording studio in Seville, where the spirits fill the wind, has helped make this the most enchanting Guadalupe Plata record yet – but this is not a departure, it is a coming home.

Froth manage to breathe new life into a sometimes stale genre…the LA four-piece marry the bleary soundscapes of My Bloody Valentine with something closer to Spoon’s metronomically tight art-rock. It’s a mixture of fuzz and precision that frequently produces surprising results: Passing Thing is a Sebadoh-like chug that takes an enjoyable detour into mathy interplay, while New Machine imagines what would happen if Lush ever tried krautrock on for size. – Guardian

In November 2015, Bloomsbury Publishing released Popkiss: The Life and Afterlife of Sarah Records, an authorised biography of the cult Bristol-based independent label. It received four-star reviews in Mojo and Record Collector (the latter naming it one of the 20 best music books of the year), and won the 2016 ‘Award for Excellence in Historical Recorded Sound Research: Best History in Record Labels’ from the U.S.-based ARSC (Association for Recorded Sound Collections). It currently holds an aggregate rating of 4.5 (out of 5) on Goodreads.

The release of Popkiss was celebrated, also in November 2015, at London’s Rough Trade East record shop. However, conspicuous in his absence was the book’s author, Michael White. Barely six weeks before he was to fly to London from his home in Vancouver, Canada, he was diagnosed with a rare, physically debilitating medical condition that had the potential to permanently rob him of his livelihood and independence. He could barely walk around the block, let alone fly to another continent.

Fortunately, thanks to rapid diagnosis and access to specialists, Michael has joined a small percentage of people who experienced a near-total recovery from his condition; he has returned to work, and is travelling and enjoying a normal life.

While the success of Popkiss exceeded everyone’s expectations (it sold out of its first edition in a month), Michael has always regretted not being able to attend his own book launch. “It was never about money—I actually lost money writing it,” he says. “The only reward I wanted was a little party in London.”

At long last, that party is happening. In addition to acoustic performances from former Sarah artists Robert Sekula (14 Iced Bears), Paul Stewart (Blueboy), and Harvey Williams, Michael will be interviewed onstage by Guardian music critic—and long-time Sarah fan—Alexis Petridis. Also: a guest DJ, free souvenirs, books for sale (should you not already have one), and a surprise or two!

Ulrika Spacek return on June 2nd with the release of their second album, Modern English Decoration. Much like their debut album released in early 2016, the band chose to record, produce and mix the entirety of the record in their shared house – a former art gallery called ‘KEN’, so named because of a cryptic inscription found above the front door. Not just a studio and home, KEN is essentially the band’s hub, a space in which the surrounding ephemera of videos, artwork and even band photos are all created.

The relatively short amount of time between their first and second albums is testament to the band’s self-contained creative environment and the productivity it encourages. There’s a tendency to label this degree of self-reliant creativity ‘DIY’ – and the band do certainly feel emboldened by that ethos – yet to consider Modern English Decoration solely in these terms is a disservice. Their craft is considered and purposeful, the means of its production reflecting the band’s overall vision rather than the value system of an often haphazard and accidental DIY culture. “We enjoy listening to music through the album format and want our records to reflect that”, says Rhys Edwards (guitars, vocals, synthesiser). “Though we may explore this in the future, our records are not ‘jam’ records. We’re fans of collage based art, and create music in the same way“

Unsurprisingly given the context of its creation, Modern English Decoration might be considered a companion piece of sorts to The Album Paranoia. But there are crucial differences. Most notably, this isn’t the work of the Ulrika Spacek conceptualised by Edwards and Williams in Berlin – Modern English Decoration is the band as five rather than two people, and it shows. Those who have witnessed the intensity of their live show will instantly recognise the merits in this. The bass and drums provide a versatile anchor, at once soft, then aggressive, while the vocals drift woozily in and out, like druggy hindsight or skewed premonition. With three guitarists in the band guitars were always going to be central to the music, but what is less expected is the dynamic interplay between the trio that suggests a three-headed version of the Verlaine-Lloyd axis at the heart of Television. What’s more, the absence of reverb is integral, in part attributable to the ambience of the studio, but also a conscious decision in order to add focus. And focus is the abiding term: this is an album designed to be just so – a 45 minute commitment, a surrender.

Sweet Baboo is Stephen Black, a native of the north Wales countryside and a single-minded, idiosyncratic singer. Black possesses an ear for a sparkling melody, a restless soul, and a gift for a deft lyrical turn – from darkly funny to piercingly tender, twinklingly boastful to deliciously self-deprecating.

Black’s productivity is all the more remarkable given his extra-curricular activities which have seen him working with an ever-growing array of musicians. Black has played on albums by Cate Le Bon, Slow Club and H. Hawkline, and has been a regular part of the touring line-up for all three bands. He has also performed with and produced Euros Childs, The Pictish Trail, The Voluntary Butler Scheme, Islet and Spencer McGarry Season and collaborated onstage and in the studio with Gruff Rhys. 2012 saw Sweet Baboo set off on a world tour as part of Slow Club’s live band as well as a North American and UK tour in Cate Le Bon’s touring band.

Rising phoenix-like from the untimely demise of Thee Vicars, The Baron Four are a dynamic new combo, drawing influences from mid 60’s British beat and US garage punk in equal measures, and are possibly the wildest group on the UK scene right now! Imagine if you will the perfect midway point between Beatles in Hamburg raw rock ‘n’ roll, and the lo-fi grind of any classic ‘Back From The Grave’ type track and you’re getting close to the heart of the ‘Four’s appeal!

“I order 2 beers whenever I go to a bar. I pick up the phone when my mom calls. I record songs in the bedroom. Not sure if I graduated high school. I want to do whatever I want. I’m best left to myself. I’m thinking of changing my phone number. The live show is going to destroy.”

Public Access T.V. are a band firmly planted in downtown New York City. Before they released their first song, played their first show, or even had a name, Public Access T.V. were a band. Best friends out every night together, sharing clothes, cigarettes, pocket change, and most importantly living together in a dilapidated East Village loft where they could stay up all night playing music… loudly.

Following from a string of brilliantly chaotic nights in the capital, including shows at the Old Blue Last and Moth Club, PATV return to London once more for what promises to be a exhilarating show indeed. Be warned tickets will go fast!

TERRY is getting ready, combing his hair, buttoning his jacket, turning the key in the door. “I’m doing fine,” sings Terry out loud, he knows. Divide him into four and you get Al Montfort (UV Race, Total Control, Dick Diver etc.), Amy Hill (Constant Mongrel, School Of Radiant Living), Xanthe Waite (Primo, Mick Harvey Band) and Zephyr Pavey (Eastlink, Total Control, Russell Street Bombings). Inevitably, Terry likes to make a noise. Drums, guitars and all his voices come into play, making a solid raft for Terry’s inner musings to navigate the languid rapids. This all unravels at its own pace, sometimes drifting into glam pop and country backwaters, always conducting a conversation with the commonplace. Love is a highway, but you’re not likely to find Terry there anymore. He’s on the plane. Terry saw the light, he put on his sunhat and is heading to Europe. Debut album, ‘Terry HQ’ was released last year by Upset The Rhythm, look out for a new album around this tour!