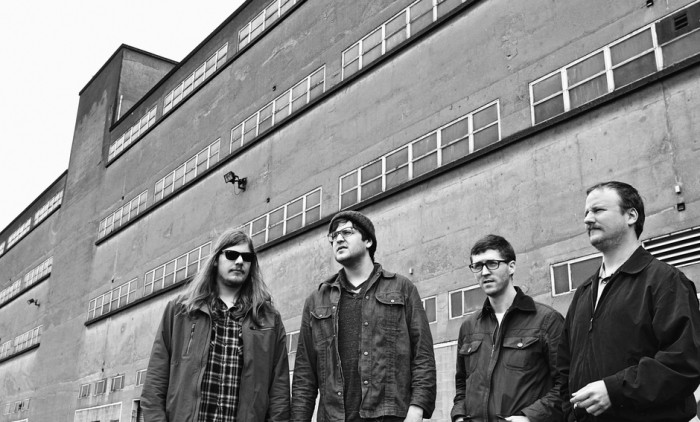 In the midst of seemingly endless blocks of branding, beer sponsors, telecommunications-owned houses and corporate frat party vibes that is neo-SXSW, there was one band who stuck out as a enduring example of what SXSW should be about, a band from Detroit called Protomartyr…

Fundamentally that is all you need to know about Protomartyr; they are a band who broadly defy constantly shrinking definition and they come from Detroit. It’s difficult to consider that the sound of their malaise is not in some way inextricably linked to a city that, in their lifetime, has crumbled into the ground, both literally and in almost any other way you could imagine.

In the recent musical climate that has seen artists race to the safety of regular radio airplay it’s refreshing to see a band playing what essentially amounts to stripped-back punk, minus the clichés of obvious ‘scene’ affiliation. Sounding somewhere between the grimy post-punk of late ’70s Britain and early ’80s American hardcore, they’re part of a wave of bands giving a face-lift to the banal façade that rock and roll has been selling of late.

It’s live where their brutal intensity stands on its firmest footing, with singer Joe Casey awkwardly receding from the limelight whilst at the same time commanding your complete attention with his loud, meandering tales about the places and people in his world. Stripped-back guitars and an almost angular rhythm section recall the brasher moments of the post-punk revival had that scene ever had anything to really rail against.

Those distinctive appearances at SXSW have created a wave that will see Protomartyr play shows across the UK in the summer. Hopefully UK audiences will appreciate the kinship that Protomartyr’s particular brand of discord shares with bands like Eagulls and the Fat White Family, amongst a growing movement of others.

Protomartyr’s Second Album ‘Under Cover of Official Right’ is out now through Hardly Art. Catch them live at The Lexington, London, on the 19th August.

Tickets via Upset the Rhythm: http://www.wegottickets.com/event/267237

This article first appeared on The Monitors