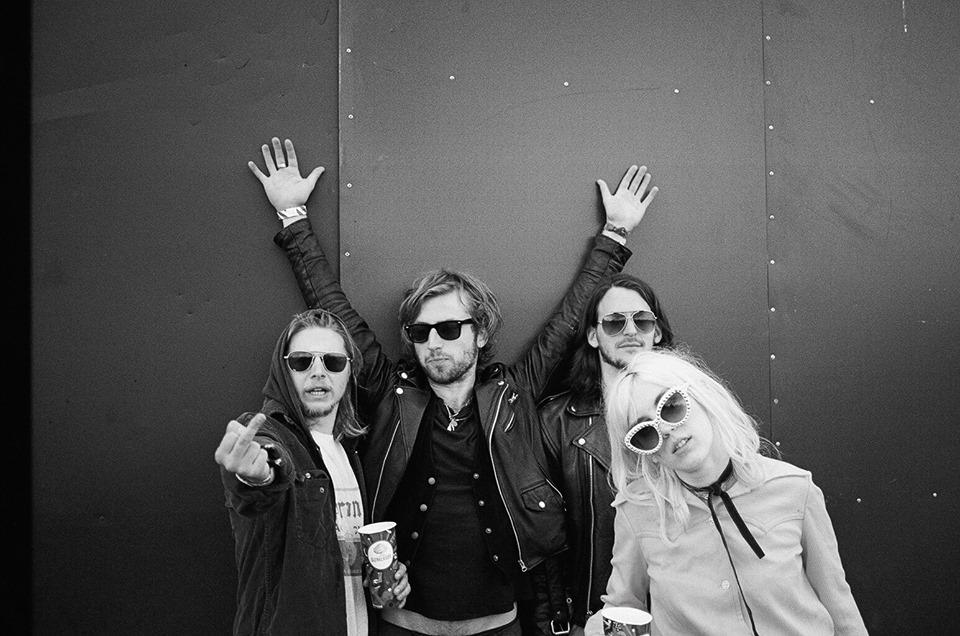 “If Lana Del Rey was (in) a rock band, it would sound like Black Honey… They blend, or rather create a burning pyre out of, girl-group pop and shoegazing guitar noise. They are fans equally of FX pedals and the lasting impact of a simple melody.” – Guardian new band of the week (No. 82)

The Oklahoma-based band creates the perfect mixture of pop and punk that explodes into a wild, sweaty dance party during live shows. Think Cheap Trick meets the Drive soundtrack meets every great song from Fast Times at Ridgemont High meets the greatest after-hours party you’ve never been to.

“If Lana Del Rey was (in) a rock band, it would sound like Black Honey… They blend, or rather create a burning pyre out of, girl-group pop and shoegazing guitar noise. They are fans equally of FX pedals and the lasting impact of a simple melody.” – Guardian new band of the week (No. 82)

For over 10 years now, Belgium-based indie rock band Balthazar has been peppering the international music scene with clever, cutting and eerily atmospheric tracks. And while they’ll continue to do so, founding member and lead singer Maarten Devoldere has just unveiled a side project known as Warhaus. Debut single “The Good Lie,” offers a glimpse into what we can expect from Devoldere’s solo work. The track smolders with film-noir-like sexuality, reminiscent of Tom Waits both lyrically and vocally, but with the sensuous intermingling of female vocals. The lush, thumping orchestration allows two direct reactions: listeners can either brood mysteriously in a corner or shake their hips like they mean it.

Their sound is difficult to describe, blending pop-like melodies, rock inspired guitar riffs and R’n’B style harmonies to create something impressively unique and enjoyable. The structure of their effortless vocal harmonies is reminiscent of the Haim girls, in the way it sounds as though minimal effort is required to produce captivating sounds, as well as the way in which they are often layered on top of a catchy bass line.

With Chris Thompson at the helm, the Glasgow based quintet could’ve, and should’ve, been one the biggest Scottish bands ever. After all, The Bathers music is articulate, beautiful, dramatic, ethereal, elegiac, emotive, languid, literate and melancholy. This is music for those that have loved, lost and survived to tell the tale. The Bathers are unlike most bands. They’re enigmatic, almost reclusive and publicity shy. Quite simply, The Bathers aren’t exactly your normal band. Not for them the rock “n” roll lifestyle favoured by other bands. In many ways, musical fashions and fads didn’t affect them. Their attitude was almost contrarian. Albums were recorded slowly and methodically. It was as if The Bathers were striving for perfection.

With a gospel-fueled voice that sounds like a cross between the hard rock blast of Bon Scott and the joyful sweetness of Al Green, Mike Farris has taken a long time to balance his life and considerable talent.

Based in New York, with American and Welsh members, Drowners are known for their post-punk British indie infused style.

Michelle Zauner is the guitarist and singer for the underrated Philadelphia indie rock band Little Big League. After her mother was diagnosed with cancer, she returned home to Oregon; while she was there, she revamped songs from her previous lo-fi releases under the name Japanese Breakfast.

The Lovely Eggs are very much a world view – singing in their own accent, writing lyrics about dinner, animals, boyfriends, teeth, scooters and tempering their odder tendencies with a strong working class aesthetic and a home-made, DIY ethos. And if that all sounds a little bit tweecore, singer/guitarist Ross is far too fond of her distortion pedal to let things go too far in the direction of cupcakes and Etsy handbags. Behind the sweetness and the skits Lovely Eggs make a bloody racket, informed by 90′s US alt punks like Mudhoney and Hole with the wit of Magnetic Fields and and the manners of Hilda Ogden.

Australian duo Oh Pep! practice a catchy yet thoughtful brand of indie pop along the lines of Lucius and Parlour Tricks. Also in common with those bands is their often harmonized female lead vocals. The group was formed in Melbourne in 2009 by schoolmates Pepita Emmerichs and Olivia Hally.

With the kind of impeccable sense of timing which eludes so many of us they released debut single ‘The Great Escape’ just as the hangovers subsided from The Great Escape Festival in Brighton. And as hangover cures go, ‘The Great Escape’ is one mightily gentle sonic comedown which Bearded Magazine described “as the background music to an ambient explosion in space”. Quite fittingly, ALMA take their name from the Atacama Large Millimeter / submillimeter Array – “a really bloody powerful telescope”.
As mainstay of Codes In The Clouds and Monsters Build Mean Robots, singer songwriter Pete Lambrou’s gently cosmic post-rock provenance is impeccable. Joined by fellow Code In The Clouder Ciaran Morahan, ALMA deploy a loop station, multiple delay pedals, a piano and strings to create a slow-moving, high-flying soundscape of luscious gravitas which permeates the entire seven tracks of their debut mini album.

“Building atmospheric and quietly epic soundscapes that creep up on your unannounced…like a beam of light through a dark, cold night..”
Lauren Lavern BBC 6 Music