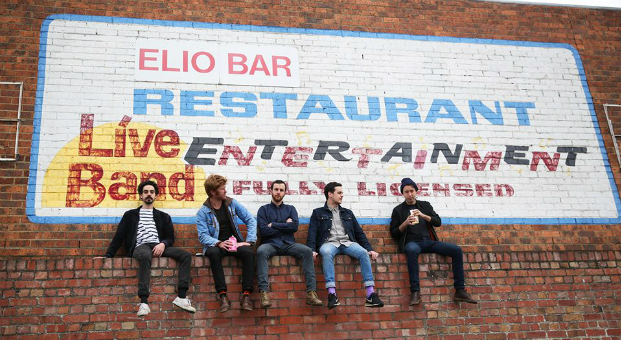 RIP summer, you looked so strong and mighty in June and showed flashes of what could have been over the bank holiday weekend but overall the weather sucked and it’s good that Autumn is finally here. No doubt it’ll be boiling hot for the whole of September just to fuck with us a bit more.

Proud to announce that the annual showcase from London cassette label Blue Tapes will this year, with a headline performance from Poland’s post-punk heroes Trupa Trupa, who will be debuting new material from their eagerly-awaited follow-up to 2015’s classic Headache LP and support from Norwegian ambient icon Benjamin Finger and kosmische-techno dons 2ndSun.

“Rip-roaring tracks that move by their own logic, any one of which could be a single and all of which leave you wanting more in the best way possible” – Pitchfork, 8.0 review rating

“Rolling Blackouts C.F. make the kind of crisp, unfussy rock music that’s been all too absent in recent years.” – Stereogum

The boldness, confidence and manic fervour Get Inuit display on stage is a result of months fine-tuning their live show supporting the likes of Slaves, Spring King, VANT and The Magic Gang.

Previous releases ‘All My Friends’ and ‘Barbiturates’ revealed the large scope and diversity the band have available in their repertoire, as well as furthering their support from Radio 1, with the track getting regular play on MistaJam and Huw Stephens’ shows.

After the show White Heat DJs till 4am – we’d love you to stay and dance!

+ Cavalli + Jack Blackburn and the Conformists

Yes Men will head back to the beautiful Lexington to release their latest album, “As Good As It Could’ve Been” on Saturday 9th September.

After one of the most incredible nights in Yes Men’s tenure last July when releasing Album 2 at The Lexington they are returning again armoured with 2 amazing support bands in CAVALLI and JACK BLACKBURN & THE CONFORMISTS for just £4 Advance (INCLUDING FEES)!!!

ALL MONEY FROM TICKET SALES WILL GO DIRECTLY TO THE 3 BANDS DIVIDED 3 EQUAL WAYS.

Making spiky, dramatic pop music, Banfi’s first official shot across the bows ‘Where We Part’ was posted on Soundcloud in April 2015, which led to the band signing with Communion Records. 2016 was spent in the studio recording their debut album with producer Richard Wilkinson (Bombay Bicycle Club, Honne, Kaiser Chiefs) and the first release from these sessions, Happy When You Go, is out now!

Brighton trio, Our Girl jump into 2017 with a string of highly praised releases under their belt, including last year’s debut EP ‘Normally’ released via Cannibal Hymns (Dream Wife, Abattoir Blues). They will headline The Lexington on 13th September, their biggest London headline show to date.

After selling out Moth Club earlier this year Pop Noire’s Lescop brings his post-punk influenced electro-pop over from France for the night.

An exciting collaborative event featuring new signings from Accidental Records and NXRecords.
London-based art pop experimentalists Ilk have teamed up with acclaimed composer and producer Matthew Herbert on their debut album, ‘Y U’, exploring the space in which found-sound recordings and infectious pop music coexist.

The first sound to be shared is the eponymously named track ‘Y U’. As if tuning into a lost 1970’s sci-fi broadcast, the album’s lead single then takes you on a mad four minute lo-fi adventure of surreal lyrics, hypnotic distorted sounds, polyrhythmic layers of kitchen sink percussion and homemade thumb pianos. ‘Y U’ is a bold and joyous introduction to the world of Ilk.

BAND OF HOLY JOY
Margin walkers and midnight drifters, Band of Holy Joy have wandered liminal landscapes of their own making for 3 decades now. The weirdness and wildness of the landscape they stagger through, the askew vision like a crash between Coleridge, Brecht and David Peace, the literary allusions and poetry, the strangeness of it all. A cultural piracy raiding doomed melancholy and gentrified mediocrity.

BLUE ORCHIDS
Blue Orchids have just released their latest album, The Once And Future Thing, which shows Martin Bramah’s songwriting to be as strong and diverse as ever, from the powerful opener “Good Day to Live” to the delicate and sensitive “Rosy Hours” and the twisted English city blues of “Motorway.” Backing Bramah live is a new band comprising John Paul Moran (Monochrome Set/Rapid Pig) on keyboards and Vince Hunt (A Witnes/Inca Babiess) on bass. They’ll be performing a set filled with classics from the group’s entire catalogue. The current dates mark a long-overdue return to the stage for Bramah and his mesmerising, shamanic performances.

Lazy Day are a dream-grunge quartet from London – and this is their biggest ever headline show to date. With the launch of the debut EP and first ever UK tour, expect this to be a big night. Support comes from Brighton’s Thyla.

Lazy Day are a dream-grunge quartet from London – and this is their biggest ever headline show to date. With the launch of the debut EP and first ever UK tour, expect this to be a big night. Support comes from Brighton’s Thyla.

They are confident wielders who make thoughtful and angry pop music that is heavy with riffs but punchy and danceable.

Live, they are an impressive force, with a gang-like mentality which leaves no one on the fence. Of course, they love the pop hooks of Fleetwood Mac and Paul Simon that they brazenly reference, but the intricacies are fun to unravel too; Savages, The Birthday Party, PJ Harvey, The Breeders…

Graceland have gathered their strength from these artists and the strong independent women around them to form an unapologetic, unique and addictive musical bond.

CHRIS SPEDDING
Chris is a founder member of Sharks. As an acknowledged master of the guitar he has played with a diverse array of talent through the years including: Tom Waits, The Wombles, Bryan Ferry, The Ventures, Paulo Nutini, John Cale, Katie Melua, Paul McCartney, Robert Gordon, Jack Bruce and Elton John.
He produced the first demos for both the Cramps and the Sex Pistols and, as a singer/songwriter, he had a hit record with Motorbikin’ in 1975 and has released over a dozen solo albums, his most recent being Joyland in 2014.

STEVE ‘SNIPS’ PARSONS
Steve is a founder member of Sharks. When the band folded he then spent 3 years touring and recording with drum legend Ginger Baker. Parsons released two solo albums in the late seventies then retired from performance in 1982. He spent the next 25 years working in the worlds of television and film. Many of his composer/ director/writer/producer credits can be found on IMDB.
In 2011 he decided to sing again and formed the band King Mob. Parsons is currently working with Swans guitarist Kristof Hahn on an original podcast series entitled: The California Death Ray.

NICK JUDD
Nick joined Sharks on keyboards following the departure of Andy Fraser. After Sharks he joined the Andy Fraser band which released one album. He has been a teacher of music for many years but has found time to pursue solo projects and play live with artists such as Frankie Miller, Brian Eno and, more recently, Lee Thompson of Madness.

GENE CLARK
Previously played drums with Spedding, Steve and Tosh in the band Presence Ldn. You can hear him on the track ‘Swirl’ on Sharks ‘Killers of the Deep’ album.

TOSH OGAWA
Tosh is a bass player with a distinctive look and sound. He was a founder member of the science fiction influenced heavy metal band Slaves to Gravity. They released 2 albums on the SPV label. In 2012 he replaced Glenn Matlock in the King Mob beat group. He has continued to perform and record with Parsons and Spedding ever since. Tosh is a Japanese national who has been resident in London for the last 17 years.

Jen Cloher is the culmination of a period of artistic and personal growth in which the artist took her rightful place as the punk-rock figurehead of Melbourne’s famous DIY music scene. The NIDA Graduate is an outspoken advocate for artist rights and the co-founder of the incredible Milk! Records label (Courtney Barnett, Loose Tooth, Fraser A. Gorman, Jade Imagine, East Brunswick All Girls Choir). Cloher’s fascinating life-story and compelling political voice is enough justification to pay her attention, but it’s the music that will have you returning again and again.

Releasing his first album under his own name last year, Nau’s new collection of twelve songs represents some of his most sharp and moving work to date, and finds the Maryland-born songwriter looking to move quickly enough to avoid some of the stop/start nature that had previously left large gaps of time falling between his output.

‘Some Twist’ will see its release on June 16th via Full Time Hobby. Overall, the album splits its time between feeling both energized and unhurried, while featuring the same penetrating songwriting that has led fans to latch onto Nau since he arrived.

Goss
“An ode to the fourth dimension, the alleged greatest healer, this could soundtrack Dali’s The Persistence of Memory” I-D

The Shakers bring funk back to The Lexington.

We have some pretty exciting surprises planned for this one. It’s going to be our last BIG party for a few months, so it’s not to be missed.

We’ve got some secret special guests lined up too, more news on that soon…

Then there are DJ’s on until 4am so it’s gearing up to be a biggun.