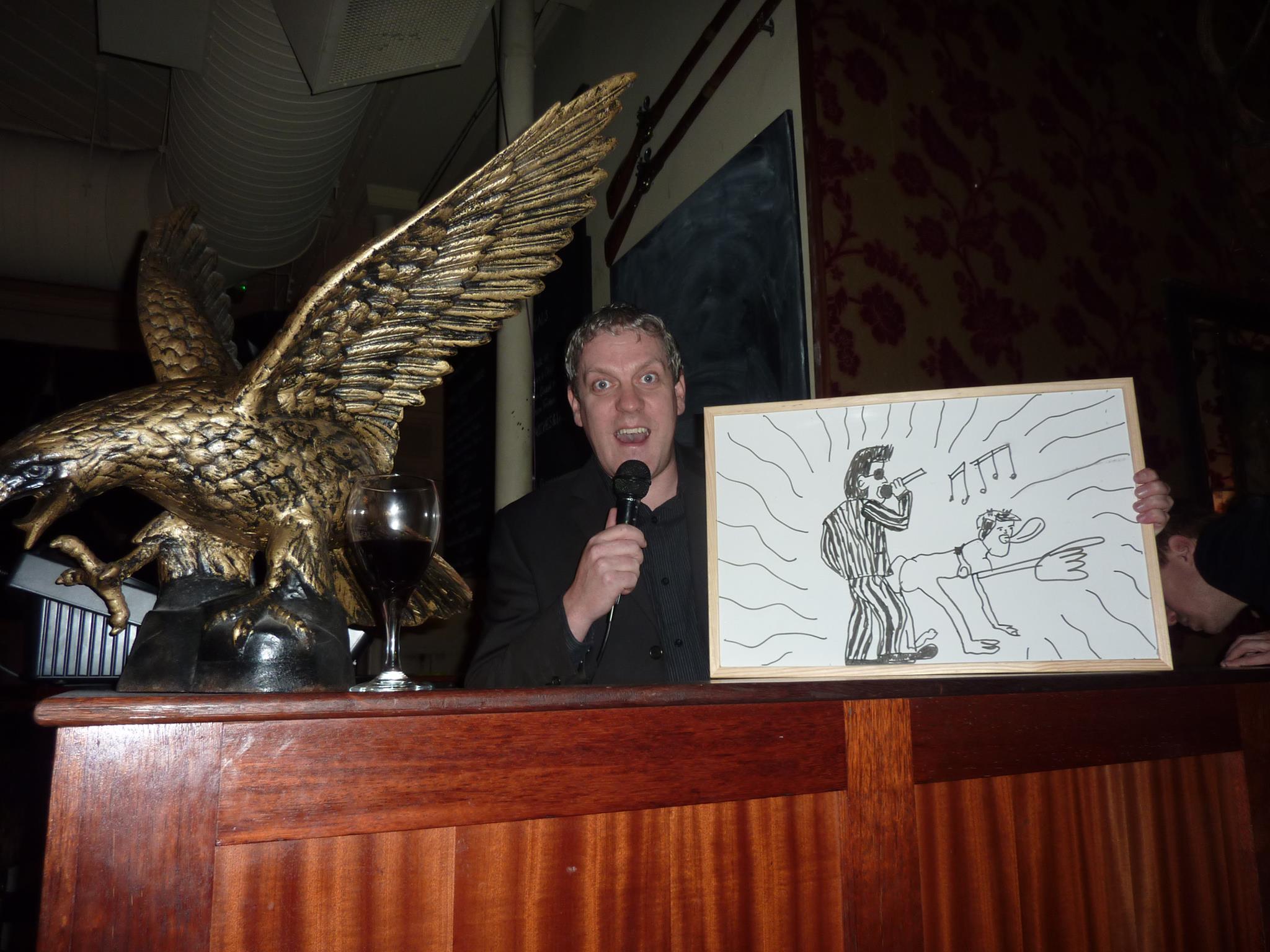 London’s favourite music quiz, the Rough Trade Pop Quiz is turning 400 on 5th December. Not 400 years old, of course, though one can only imagine what a 16th Century record store would have looked like – empty would be my guess as the first piece of recorded music wasn’t even made until 1860 and no one bothered to listen to that until 2008!

400 quizzes is a lot of quizzes, eight years of Rough Trade Pop Quizzes every Monday night to be precise, eight years of Rough Trade Pop Quizzes with the same quiz master [almost] every Monday night if you’re being picky about it. That’s A LOT of fucking quizzes and a lot more questions when you remind yourself that each quiz has about 40 questions. The mind boggles. Weekly.

I had a chat with Paul Guided Missile, the sarky Scouse quiz master who plays renditions of pop songs on his keyboard… 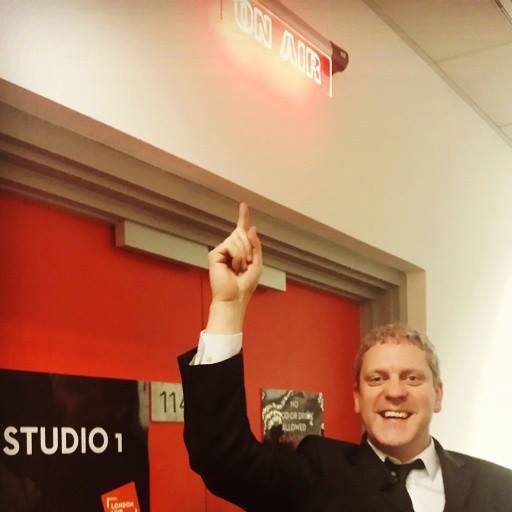 Makes me feel old but actually I’m not! And also I’m dead trendy and snazzy and I know all the 45s at the top of the hit parade.

When did you do your first quiz?

About 8 years ago, when the Lexington opened! I think I went in there about week 3 of its existence. Done it every week since; come rain or shine. I’ve done it with broken ribs, a broken leg, a broken heart.. Did it once with when I could hardly stand up cos I had some mad thing called Labyrinthitis and had a whole round about dizzy songs and that David Bowie film.

So in 8 years you’ve done almost 400 Rough Trade Pop Quizzes, how do you keep finding new questions, surely you’re going to run out one day!?

I will never ever run out of questions because I know everything about music. All music. Also, whenever anything happens, like it snows, or there’s a heatwave, or a psychotic maniac gets made president of the U.S, we have a round of questions vaguely based around the story. When the Chilean miners were rescued, we had a round celebrating that, which ended with me playing You Raise Me Up on the synthesizer, whilst I had a hand painted model of a rescue capsule with a Chilean miner inside, being hoisted up with my non playing hand. It was boss.

What’s the hardest question you think you’ve ever asked?

Each week I set a ‘Headfuck Question’. This requires the contestants to write a list of things… It could be to name all the singles from Michael Jackson’s Bad, the last 10 Xmas no1s, all the things Alanis Morrisette finds ‘ironic’. Some of these can pretty hard.

What’s your favourite question, one where you’ve thought to yourself no one is ever going to get this, I am an evil genius.

And the answer is…?

You once did the Rough Trade Pop Quiz on top of the 4th plinth in Trafalgar Square, how did that come about?

When Anthony Gormley invited a couple of thousand people to stand for a hour each on top of the 4th plinth I was one of the participants. I did the quiz with a megaphone, a battery powered amp and an ipod, while my pal Rory took care of business down below, handing out the answer forms on clip boards and awarding the prizes at the end. 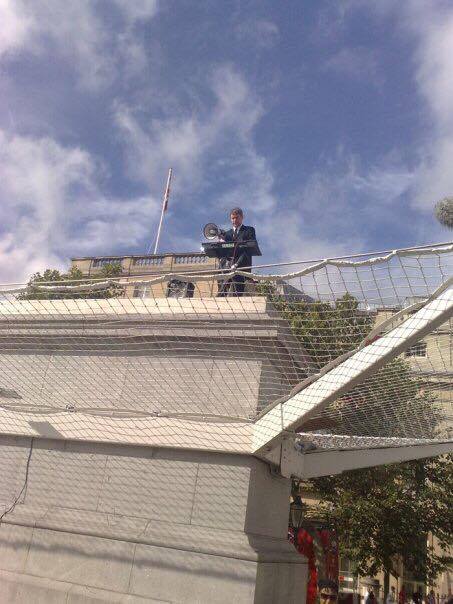 You’ve done the Pop Quiz at V Festival, how many people was that for? And how the fuck do you maintain order in a situation like that?

Well, yeah, it was a bit mad. I’d actually been booked to do it in the Carling Tent. They’d said to me: You’re on at 1pm. I thought: Great! Nice and early in the day, no hassle. I thought I was the first ‘thing’ on, but what they didn’t tell me was that at midday, they had a DJ playing an hour of loud, nice, headnoddy music. Now, here’s where it got difficult… After 50 minutes of nice, headnoddy music, it began to rain outside on the site, suddenly about 500 or more Oasis fans looked for the first undercover refuge with a bar and it just happened to be the Carling Tent. Now, picture the scene, 500 Oasis fans are in a tent, supping drinks, keeping dry and nodding their heads to music, when, all of a sudden, a middle aged man turns off the tunes and starts asking questions. It was not a good scene. “Boooooooooooooo! Put the music back on!”. Well, as luck would have it, I had brought one of them Casio key-tar things and prepped some backing tracks to play an Oasis medley as the finale. It didn’t take long for me to realise the best course of action was going to be to put this section nearer to the beginning of the quiz… in fact… right now, before the bottles start flying. So I strapped on the key-tar and shouted “Suuunsheeeeeeeee-iiiine!!!!” and launched into Some Might Say, complete with bossa nova accompaniment. It was a triumph.

You award a multipack of crisps for the best team name, any team names that really stuck out over the years?

There’s a team called “Bono is still a c*nt” who come occasionally. We often get good puns based on current news stories.. and our fair share of names with ‘Quiz’ in, like Quizteam Aguilera and Quizzy Rascal. One team cleverly mocked that idea once by calling themselves Dizzy Razcquiz (or was it Christina Aguilerquiz?).. but the best team name I can remember was (again my pal Rory) with “You Don’t Have To Be Rich To Be My Girl, You Don’t Have To Be Cool to Rule My World, Ain’t No Particular Sign I’m More Compatible With, I Just Want Your LEXINGTON And Your ….. QUIZ!”

What are your favourite crisps?

Can we have an answer to a question in the 400th quiz?

“The connection is: They all had the most weeks on the UK Singles Chart in a particular decade”

bookings@thelexington.co.uk to book a team table.