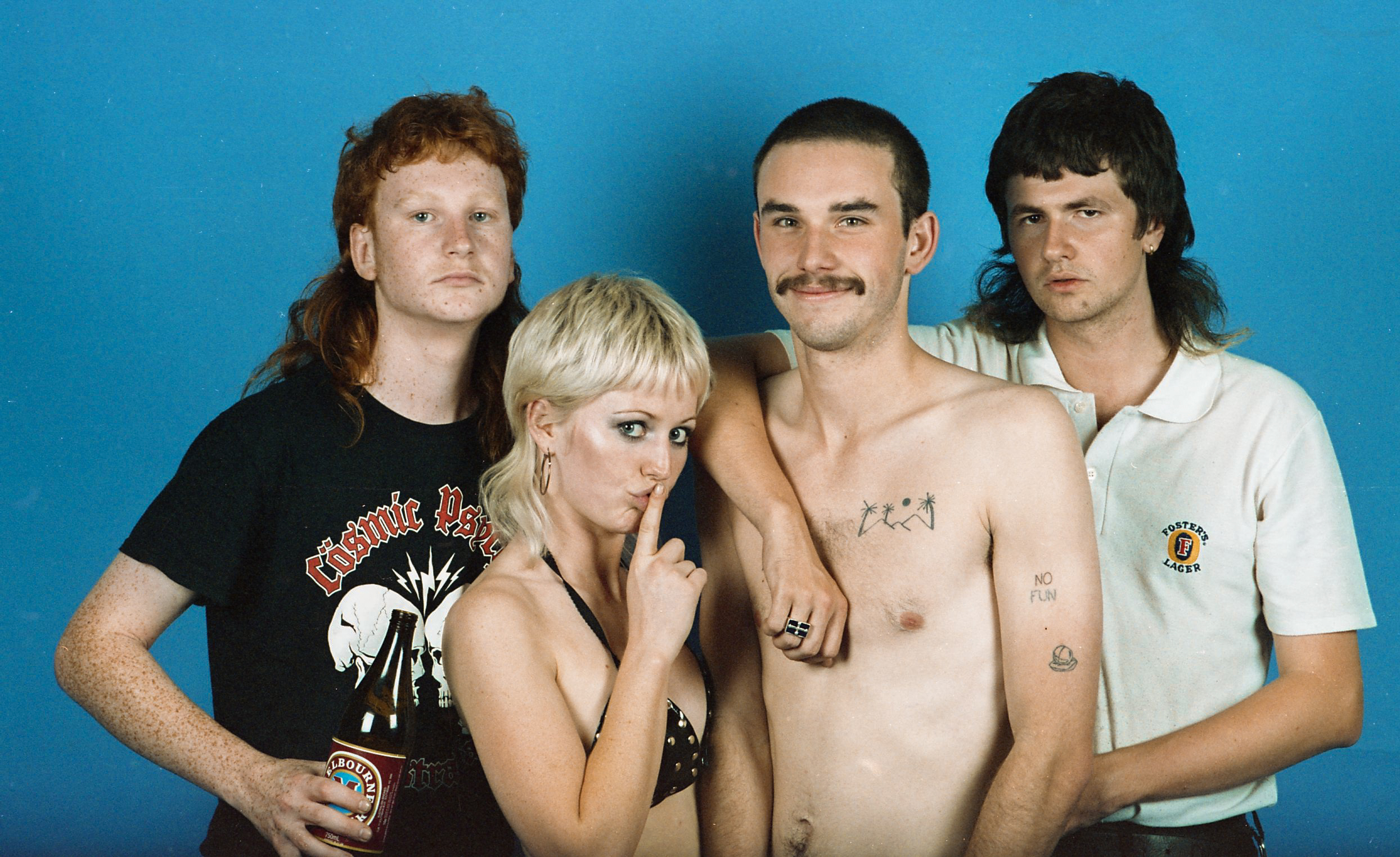 From 2014 to 2017 Vundabar’s Brandon Hagen cared for a loved one that had fallen into a debilitating state of mental and physical decline. For four years his sickness and the eventual loss that followed became the focal point of Hagen’s life as well as his family’s. It was the bell jar under which they lived. Hagen was fractured into two selves; one, largely insular, racked by grief and loss and the other putting it on, touring relentlessly and hoping to be as affable as possible lest he ruin the opportunities at hand. These were the fencings and borders he made for himself and for a time he let them stand. He presented a shell of charisma and withdrew into isolation and despair, convinced he was doing right by the old dogma of stoicism. He didn’t tell a soul out of shame and embarrassment; whose he didn’t know.

‘Smell Smoke’, the band’s anticipated 2018 follow up to their breakout 2015 album ‘Gawk,’ is an attempt at openness and vulnerability. It’s an attempt at unlearning. It’s a document of grief; a child crying into the dark.

Over three years since the release of the critically-acclaimed ‘Mysteries’, East London’s Tigercats return with their much anticipated follow-up, ‘Pig City’ – a record that builds both musically and lyrically on their work to date.

Almost completely self-recorded and produced by bassist Giles, ‘Pig City’ hears a broadening of the band’s indie pop influences, expanding into highlife, afrobeat, and scuzzy West African psych. Sonically more aggressive, ‘Pig City’ is the sound of a band directing their anger at the incessant gentrification of East London as developers close in on the studio they call home.

Tigercats’ third record, and first with Barcelona label El Segell del Primavera, ‘Pig City’ is the sound of a band unafraid of changing a winning formula – with the results fierce, bold and powerful.

Luke Haines has fronted The Auteurs, Baader Meinhof and Black Box Recorder, released 13 albums under his own name, composed the soundtrack for Paul Tickell’s movie, Christie Malry’s Own Double Entry, penned a couple of acclaimed memoirs, Bad Vibes: Britpop And My Part In Its Downfall and Post Everything: Outsider Rock And Roll and been described by novelist John Niven as “the Travis Bickle of Britpop”.

The Spook School are Nye Todd (guitar/vocals), Anna Cory (bass/vocals), Adam Todd (guitar/vocals) and Niall McCamley (drums). Since forming in 2012, they’ve released two records to critical acclaim: 2013’s Dress Up, a gender-binary eradicating release—noisy, cheery pop critical of social construction and its limitations, and 2015’s Try to Be Hopeful, a celebration of queer and trans identities from a place of newfound self-assurance. The band, whose name originates from the Glasgow School, have lived a lot of life since then: Could It Be Different? was written from space that follows aplomb. “You’re comfortable with yourself, as much as you ever can be but you have to live with that person anyway,” Nye says of the record, “There are more questions than answers. That’s why the title works well—it has that insecurity to it.” Adam agrees, “It also comes from a place of feeling like everything definitely isn’t alright now,” pausing. “Maybe things could change?”

At the beginning of 2017 Donnelly released her debut EP ‘Thrush Metal’ and was met with critical acclaim. The five-track release was written over the space of two years; a musical undertaking resulting in a bold and unapologetic repertoire of songs which has forged Donnelly to the forefront of the new guard of Australian songwriters.

Donnelly’s brutally honest and witty observations of people and relationships are transformed into blissful poems and lyrical punch lines on her standout debut EP ‘Thrush Metal’. Donnelly’s relatable way of writing is her lens to the world in which we live, a glimpse into what it’s like to be a millennial woman in the age of Trump, Tinder and third wave feminism.

Thought Forms are one of those rare acts for whom the term “sonic progression” actually applies. Judging by the beguiling sound chasms of their debut, through the alternatingly brain-melting and biting Ghost Mountain to last year’s near perfect Songs For Drowning they are also on a quest for sonic perfection.

Oh and they can do it all live as well, and in spades! Which is why we are thrilled to put them on one of the best stages in London and on a Saturday night to boot.

Led by Julia Steiner and Dave Sagan, Ratboys modern, tender spin on country and indie-rock is a blessing. Call it what you will or just lap up the nostalgia – tingled vocals that sway along like a lighter in the wind, string poppin’ licks that excite the hips. Listen to their latest EP, GL out on Topshelf Records and see what the fuss is all about.

Wild Pink (New York)
Sitting further East are Brooklyn’s Wild Pink – a group whose pace matches the whimsical 90s of bands like Yo La Tengo and The American Analog Set. Few can pull of something so simple on the surface yet engrossing. An auditory equivalent of a gigantic hug. Set yourself up for a nice time and listen to their debut 2017 s/t on Tiny Engines.

WOAHNOWS (Plymouth)
Someone is hogging all the hooks, Get physical on Big Scary Monsters and Specialist Subject.

HOLDING PATTERNS (Derby)
3/5’s of the mega Crash of Rhinos. First London show. We’re in for a treat.

Amyl and the Sniffers

The band’s three-chord punk rock riffs would bring a tear to Kim Fowley’s eye. Then there’s Amyl and the Sniffers’ catchy track 70s Street Munchies, with its subliminal references to Eskimo Pies and Chico Rolls. And wasn’t sniffing amyl nitrate the cheap narcotic pleasure of many a ‘70s nocturnal gathering?

Amy Taylor laughs when I make the superficial observation. “I suppose it’s just what interests me and influences me,” she says. “Growing up around my parents, who grew up in the western suburbs of Sydney, that’s what I’ve been around – muscle cars, shit punk music, that kind of stuff.”

Amyl and the Sniffers started out as an impromptu bedroom recording project. “We all lived together, so we all got home from work and study,” Taylor says. “Callum, another guy who I lived with, had all this stuff set up in my room, ready to record. So we sat down for four hours, we wrote and recorded and he mixed the EP and that day we put it out. ”

Mixing influences like Wilco, The Velvet Underground and The Doors

An all metal tribute to the Beegees that will literally blow your tiny fucking mind. I’m not even joking.

Born out of the impenetrable divide of Disco and Metal, these fearsome brothers fearlessly obliterated the truce line that had been set in the great Disco/Metal Peace accord of 1977 when they seamlessly blended the two genres with their debut album, We Rock Sweet Balls and Can Do No Wrong – a collection of Bee Gees songs redone in a heavy metal treatment reminiscent of Judas Priest, Motley Crue and Guns N Roses. Since then, they have crisscrossed the globe with their spectacular live shows and having stormed across the USA, UK, Germany, Netherlands, France and Switzerland. Subsequent full length albums, Humbled By Our Greatness, Death To False Disco Metal, The Solo Albums and The Joy of Sex have seen them spread their glittered wings to take on non Bee Gees classics from the disco era, soft rock anthems and party jams.In 2015, Tragedy broke the internet with a viral video featuring their take on You’re the One That I Want from the Grease soundtrack.  In 2017, Tragedy’s video for Stayin’ Alive broke the internet once again.

For the first tour, Brooklyn Sound have teamed up with Ho99o9 to help create an intimate & bloody experience. 4 nights of Hell is only happening in the UK and only available to a limited number of people. First come first bleeds, we’re watching. If your sensitive to blood then the Ed Sheeran gig is right up the street for you to attend. Once the doors are locked no one enters and no one leaves, Hell begins.

L.A. by way of New Jersey hip hop/punk mutants Ho99o9 (Horror) captivate every audience to have the good fortune of laying eyes and ears on them. From dive bars and club shows to festivals and arenas, the duo bring both chaos and camaraderie in a way that only they can. Ho99o9’s debut album ‘United States of Horror’ was released last year via their own Toys Have Powers label and they’ve just revealed a music video for ‘Street Power’, a track which features on the record. Directed by Philippa Price, who has worked with a whole host of artists including Rihanna, Pharrell & St. Vincent, the clip features apocalyptic scenes commanded by Ho99o9’s own the OGM and Yeti Bones alongside a cast of supporting Freax.

Her debut album is a twelve song run of empowerment anthems. To be expected, her initial release, Whites in their Eyes, was a self-assuring single. It hit as a belligerent attack in digestible, personable form – with her vocal delivery obviously sincere and her instrumental charge unignorable. Mattiel mixes soulful Americana with slick California sensibilities, and she’s taking it live in London. Don’t miss this.

Desert Mountain Tribe released their debut album Either That Or The Moon in the spring of 2016 to positive reviews from UK publications such as Shindig, Classic Rock, Louder Than War, Drowned In Sound and The Arts Desk.

They got off to a flying start with early standout track ‘Coming Down’, which was featured on Reverb Conspiracy Volume 2, a release double-headed by both Fuzz Club Records and Austin Psych Fest. In 2015, the band went on to produce a handful of cool and well-received demos that would ultimately assist in finding an album deal with Membran Entertainment Group in Europe/UK, and Metropolis Records in North America.

Subsequent releases have included two digital EP¹s, If You Don¹t Know Can You Don¹t Know Köln and Live At St. Pancras Old Church, plus the Youth mixed single Enos In Space (Top Of The World).

The band spent much of 2017 on the road, including tours of both North America and mainland Europe, with new drummer Frank van der Ploeg joining the group in the autumn.

Desert Mountain Tribe’s last single of 2017, the epic ‘Interstellar¹ taken from their 2016 debut album Either That Or The Moon¹, was edited down from its original nine minute duration and boasted a superb video directed by Daniel Turner of Sound & Colour, which won a Video of the Year accolade from the UK site Live4Ever and also US magazine Pow:

Following continued touring in both the United States and mainland Europe they are currently engaged in recording and producing their follow-up album to be released on June 1st 2018.

Loma’s self-titled debut reveals a band obsessed with songs as sound. There are endless details to discover here, stoked by the album’s urgent and searching lyrical themes (exquisitely delivered by the translucent voice of Emily Cross); and on headphones, the album feels both intimate and expansive, like casting your eyes over a detailed painting on a vast canvas.
It’s also the product of a joint pilgrimage around the globe by fellow touring musicians. Jonathan Meiburg is best known as the singer of Shearwater; Cross and the multi-instrumentalist and engineer Dan Duszynski form Cross Record, originally from Chicago.

Keep your eyes peeled for the album’s release on 16th Feb (via Sub Pop Records) ahead of this trio’s highly anticipated show!